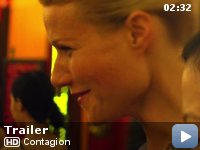 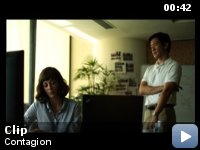 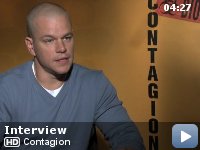 A thriller centered on the threat posed by a deadly disease and an international team of doctors contracted by the CDC to deal with the outbreak.

Storyline
Soon after her return from a business trip to Hong Kong, Beth Emhoff dies from what is a flu or some other type of infection. Her young son dies later the same day. Her husband Mitch however seems immune. Thus begins the spread of a deadly infection. For doctors and administrators at the U.S. Centers for Disease Control, several days pass before anyone realizes the extent or gravity of this new infection. They must first identify the type of virus in question and then find a means of combating it, a process that will likely take several months. As the contagion spreads to millions of people worldwide, societal order begins to break down as people panic.

The actual desk of Benny Evangelista, reporter for the San Francisco Chronicle, appears in the film as Lorraine Vasquez's desk. Evangelista's desk is notoriously messy, and was left as it was by the crew.

Incorrectly regarded as goofs:
Even though the population of Minneapolis, Minnesota is technically just over 300,000, the 3.3 million number as annotated in the film refers to the total metropolitan area and not just the city.

Dr. Ellis Cheever:
What have you eaten? I mean something that didn't come from a vending machine.

Good movie, but could have been better


I saw this movie at a pre-screening in St. Louis. I thought it was
good, and I did enjoy it, but I also thought it could have been better.
It's about a virus outbreak that is untreatable, and threatens the
whole world's population. I thought it had a kind of 'CSI' vibe to me.
I liked the way the story showed what day it was, place, etc, and kind
of followed the outbreak across the globe. The acting by Matt Damon and
Jude Law was great, but overall it just didn't have enough conflict. I
felt like I had seen it before in similar movies, and there was no main
protagonist/bad guy to fight against (well, besides the virus itself,
of course!) The film made me think about germs, diseases, and
government cover ups. Which are all too real even today. I did really
like the last scene and how the movie came full circle. Overall though,
I felt like it could have gone somewhere, but didn't. But still I
enjoyed it and would recommend it, it's just not one of my favorites.
7/10