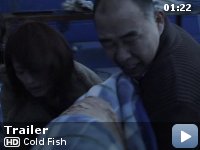 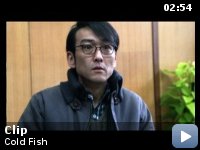 Storyline
When Syamoto's teenage daughter is caught stealing, a generous middle-aged man helps resolve the situation. The man and his wife offer to have Syamoto's troublesome daughter work at their fish store. Syamoto soon discovers the horrific truth of the seemingly perfect couple.

Taglines:
How far will you be pushed?

This movie was "inspired by true events" known as the "Saitama serial murders of dog lovers"; the convicted killers in the real-life case are Gen Sekine (b. January 2, 1942) and his ex-wife Hiroko Kazama (b. February 19, 1957).


Even though the protagonist (Shamoto) is an adult, this is essentially
a coming-of-age movie in a doomed world. Shamoto is introduced to
Murata, a psychopath. Everyone seems to do what Murata wants them to,
including Shamoto's wife and daughter. Shamoto tries to go against the
grain, to say 'I don't want things to be like this.' But he finds
himself alone against everything and has to learn some unpleasant
truths about the world.

This is a very bleak movie and over-the-top in its negativity. It can
be hard to watch at times but the violence is not gratuitous. It serves
a purpose. The (brilliant) ending would not have the same impact
without what came before.

Even though this is a crazy, overblown movie about a psycho killer, it
only uses that as framework to address more universal issues of abuse,
authority, dependency and responsibility.