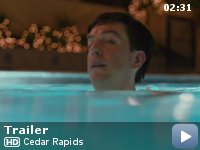 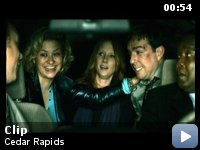 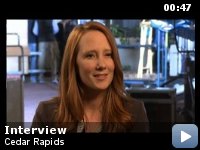 Tim Lippe has no idea what he's in for when he's sent to Cedar Rapids, Iowa to represent his company at an annual insurance convention, where he soon finds himself under the "guidance" of three convention veterans.

Storyline
Tim Lippe (Helms) was the guy people always thought would go places but then he just … didn't. He's been living in über-sleepy Brown Valley, Wisconsin his whole life, still "pre-engaged" to his 7th grade teacher Macy Vanderhei (Weaver), while selling insurance to protect other people's dreams. But now, Tim's stalled life is about to get a kick-start because, for the first time in his 34 years, he's headed to a "major" metropolis – Cedar Rapids, Iowa – where he must try to save his company at a do-or-die insurance convention that, for him, will be entirely unconventional. From the minute he checks into his hotel with his ancient American Tourister and cummerbund money belt, it's clear Tim has no idea how the modern world really works. He is soon smitten with seductive Nebraskan insurance agent Joan Ostrowski-Fox (Heche) and awed by his experienced roommates…

Taglines:
Today Is The First Day… Of The Rest Of His Weekend.

Although originally intended to be shot on location, production was moved to Ann Arbor, MI when Iowa shuttered its film tax credit program.

Continuity:
When Ed Helms is in the swimming pool with Anne Hech character he has a large "zit" on his back (right shoulder) – Missing in next scene when he is in the room with her.

Tim Lippe:
[voice-over]
One of the reasons I love Brown Valley so much is that when you do business here, chances are good you know the person you're dealing with.

My insurance agent was never this funny.


I think Ed Helms just invented a new genre, the Midwestern. Ed Helms,
Anne Heche, John C. Riley and Isiah Whitlock Jr. take you on one heck
of a funny ride from the very beginning all the way through the end
credits. Miguel Arteta did a terrific job directing the talented
ensemble. Phil Johnston's hilarious screenplay humor was kept real
without succumbing to worn out clichés. Ed Helms' character insurance
agent Tim Lippe made you believe in his distinct sense of right and
wrong. He transformed those around him by example not preaching. Every
character added to the richness and heart of the movie. What could have
easily become another sophomoric slapstick comedy turned out to be a
wonderful story that just happened to be the funniest thing I've seen
in a long time.