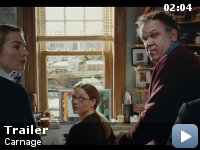 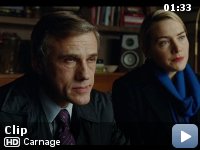 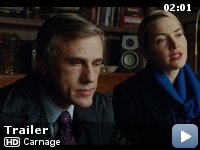 Two pairs of parents hold a cordial meeting after their sons are involved in a fight, though as their time together progresses, increasingly childish behavior throws the evening into chaos.

Storyline
In Brooklyn Bridge Park, eleven year old Zachary Cowan strikes his eleven year old classmate Ethan Longstreet across the face with a stick after an argument. Among the more serious of Ethan's injuries is a permanently missing tooth and the possibility of a second tooth also being lost. Their respective parents learn of the altercation through Ethan's parents questioning him about his injuries. The Longstreet parents invite the Cowan parents to their Brooklyn apartment to deal with the incident in a civilized manner. They are: Penelope Longstreet, whose idea it was to invite the Cowans, she whose priorities in life include human rights and justice; Michael Longstreet, who tries to be as accommodating as possible to retain civility in any situation; Nancy Cowan, a nervous and emotionally stressed woman; and Alan Cowan, who is married more to his work as evidenced by the attachment he has to his cell phone and taking work calls at the most inopportune times…

Taglines:
A new comedy of no manners.

Director Cameo:
[Roman Polanski]
The neighbor who opens the door to take a look at what is happening outside the house.

Continuity:
Once the amount of whisky in the bottle reaches to about 2 inches from the bottom, there are a few more glasses filled that should have emptied it, but instead the whisky continues to remain at that same level in the bottle.

Alan Cowan:
I saw your friend Jane Fonda on TV the other day. Made me want to run out and buy a poster from the Ku Klux Klan.

The God of Carnage

"Carnage" is one of the most interesting films I've ever seen in a
while with a unique style,so European.Roman Polansky is back with a
superlative satyr of our society from the play by Yasmine Reza.He
decided to maintain the original structure of the play,though
translated into cinema.But the scene heavily relies on the dialog and
the terrific performances by the four leading actors,none of them
slightly miscast and greatly absorbed into their roles.So be aware that
you're going to see pure theater.If you expect a story,a rich script
and action,forget about "Carnage" because there is no dynamic.It's all
about actors-and what actors I must admit- and unforgettable dialogs
about our granted beliefs about family,education,marriage,behaviors and
so on.I particularly enjoyed the escalation of the at first polite
confrontation between two sets of parents,properly reunited to discuss
about an altercation between their two sons in a park.As I said before,
the acting is absolutely amazing.We can't help but follow their
progressive dissatisfaction and disillusion about life and their lose
of the control in a funny and hysterical confrontation.Jodie
Foster,Kate Winslet,Christoph Waltz and John C. Reilly are truly
magnificent, all of them delivering tremendous performances-My vote is
10/10.

TagsFrance
Bucky Larson: Born to Be a Star
The Forgiveness of Blood