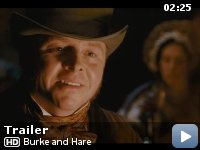 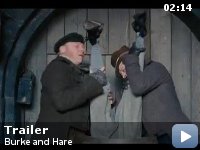 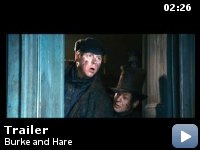 Storyline
Based on the true story about the famous murderers, 'Burke And Hare' follows the hapless exploits of these two men as they fall into the highly profitable business of providing cadavers for the medical fraternity in Nineteenth Century Edinburgh, then the centre of medical learning. The one thing they were short of was bodies.

Taglines:
No Job Too Small. No Body Too Big. No Questions Asked.

Continuity:
In the "multiple dissection" scene Tom Wilkinson uncovers each of the four dead bodies one at a time. But, following a quick edit to the applauding students, in a closer shot one of the bodies is covered up again.

William Burke:
She is an actress, not a whore.

The biggest challenge the story faced was turning two mass murderers into characters you can follow, laugh with and have empathy for and I think this film does it really well.


Released just in time for Halloween is the macabre tale of Burke and
Hare! Set in 1820's Edinburgh, two Irish immigrants, William Burke
(Simon Pegg) and William Hare (Andy Serkis), try one business venture
after the next, and one after the next they fail. Just at the point
where they're about to face financial ruin, the duo come up with an
ingenious idea when they spot a in the niche in the market for the
supply and demand of fresh dead bodies which manages to turn their
fortunes around.


The story is inspired by true events which took place in Edinburgh
between November 1827 and 31 October 1828 when the real life Bukre and
Hare murdered 16 people and sold their bodies to a private anatomy
lecturer, Doctor Robert Knox (played by Tom Wilkinson in the film), for
dissection at Edinburgh Medical College. Although this is the 8th time
their story has been brought to the big screen, this marks the first
time that we see them as two likable lead characters.

From a screenplay penned by Nick Moorcroft and Piers Ashworth and
directed by the legendary John Landis, Burke And Hare harks back to the
days of the old Ealing Studios dark comedies like Kind Hearts and
Coronets (1949) and The Ladykillers (1955) which director John Landis
is very fond of. It looks at the friendship between these two guys and
focuses on the idea of who the bad guys really are. The doctors or the
killers themselves? Mixing in a little Shakespeare with an all female
production of Macbeth by Isla Fisher's character, Ginny, an aspiring
young actress whom Burke falls madly in love with, another layer is
added to the story. While Ginny ponders what would drive a man like
Macbeth to murder, Burke looks at her and explains the character's
motivation; "He did it for love".

By and large, I really enjoyed Bukre and Hare. The biggest challenge
the story faced was turning two mass murderers into characters you can
follow, laugh with and have empathy for and I think this film does it
really well. As Burke is talked into the business with Hare, there's
never the slightest feeling that his friend is purposefully leading him
down a path to his own downfall, unlike the real Hare who gave Burke up
in the end to escape a public hanging. Another element of the movie
which was enjoyable was seeing so many familiar faces turning up in
smaller roles; Ronnie Corbett decked out in his red and blue uniform as
Captain McLintock, Christopher Lee as Old Joseph, one of Buke and
Hare's early unfortunates and perhaps the most hilarious scene of all
is when they push Paul Whitehouse down a flight of stairs! It's a good
one to see if you're after something dark and funny this Halloween.