Bucky Larson: Born to Be a Star 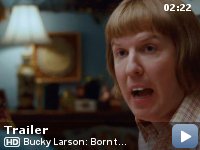 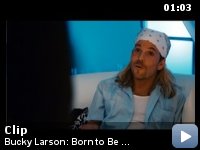 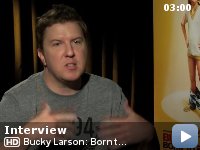 Taglines:
There Are No Small Actors. Just Small Parts.

A movie with absolutely no life whatsoever

How does a movie like Bucky Larson get made? Here is a movie that
appeals to no audience I can think of, and yet it is playing on
thousands of screens. The only logical explanation I can come to for
this movie's existence is that Mr. Sandler has some very incriminating
photos of someone at Columbia Pictures.

Let me stop this plot synopsis, and ask a simple question – Does this
sound like a movie you would want to see? Does it even sound like a
movie to begin with? I find myself returning to my original question,
how does a movie like Bucky Larson get made? It holds absolutely no
laughs, its lead character is an unlikable schmuck with an overbite and
not a shred of knowledge of how to behave in social situations, and
there's literally no plot to speak of. Just one situation after another
for Bucky to humiliate himself. As the movie dragged on for nearly 100
interminable minutes, I came to realize that the entire screenplay
revolves around three basic jokes. 1:) Bucky has buck teeth and talks
funny. 2:) Bucky has a small dick. 3:) Bucky orgasms instantly every
time he sees a woman take her shirt off. The movie repeats these same
jokes many times, as if it thinks if it repeats them enough, it will
wear down our defenses, and we'll eventually start laughing.

Yes, Bucky Larson is a dead movie. It shows no signs of life or
inspiration. It doesn't even have the decency to be a lively or
memorable bad movie. It just sort of lies there, not doing anything,
and then asks us to leave 100 minutes later. Those who know me know
that I never wish ill will upon anyone, but I seriously think that a
movie like this could end careers. I hope that doesn't happen. I'm sure
Nick Swardson is a nice and funny guy in real life. I'm also sure he'll
be apologizing for this one for a long time to come.