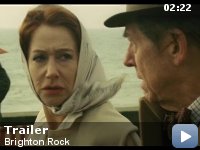 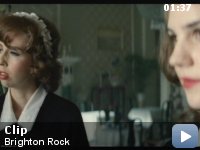 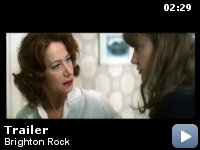 Charts the headlong fall of Pinkie, a razor-wielding disadvantaged teenager with a religious death wish.

Storyline
An adaptation of Graham Greene's classic novel about a small-town hood who marries a waitress who witnessed him murdering a rival thug in order to keep her quiet. As his gang begins to doubt his abilities, the man becomes more desperate and violent.

Carey Mulligan was cast as Rose, but was replaced by Andrea Riseborough after Mulligan dropped out to do
Wall Street: Money Never Sleeps.

Why Make This Again?


I went to see this version of Brighton Rock with my mum. She was keen
to see how it matched up to the original Boulting Brothers film with
Richard Attenborough. She and I were both disappointed.

I was actually really rather bored for the first half and wanted to run
out of the cinema screaming. It seemed to take for ever to get going.

There were no characters I could empathise with. Rose who falls for bad
boy Pinkie seemed too dim and snivelling to care about and Pinkie had
so little charm I couldn't care less what happened to him. The actor
Sam Riley's maturity (around 30)was against him playing the role of
Pinkie, who I realised long into the film was meant to be in his teens.

I thought that, perhaps the story, wasn't for me…. My mum kept on
that it wasn't as good as the "classic" original. So I thought I'd find
out for myself and got hold of a DVD. Was she right? Yes. Although by
no means perfect it had a robust sense of what it was: a British noir
gangster film. Set in 1940s, shot in stark black and white it was
gritty and hard and menacing.


Whereas the look and feel of this version seemed to be at odds with the
subject matter. In it's attempt to be lavish, this production, up-dated
to the 60s seemed at times too clean and shiny. On the other hand, at
other times it was unrealistically grubby : Rose's home – a 60s socail
housing tower block, which would in reality have been spanking new, was
dressed down to look disgustingly filthy and run down.

These kinds of inconsitencies popped up not just in the design, but
throughout the music, the camera-work and the diercting of the actors.
The pacing of seemed to jump from set piece to set piece without a
sense of flow or overall tone. The separate elements of the film didn't
gel. The best description I can come up with is "clonky". In fact, I'd
go further and say it is a ham fisted mishmash.

Sorry to the filmmakers, I think you wasted a lot of effort on this.
which is a shame.