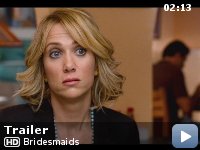 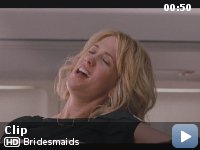 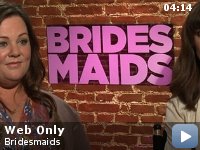 Competition between the maid of honor and a bridesmaid, over who is the bride's best friend, threatens to upend the life of an out-of-work pastry chef.

Storyline
Annie (Kristen Wiig), is a maid of honor whose life unravels as she leads her best friend, Lillian (Maya Rudolph), and a group of colorful bridesmaids (Rose Byrne, Melissa McCarthy, Wendi McLendon-Covey and Ellie Kemper) on a wild ride down the road to matrimony. Annie's life is a mess. But when she finds out her lifetime best friend is engaged, she simply must serve as Lillian's maid of honor. Though lovelorn and broke, Annie bluffs her way through the expensive and bizarre rituals. With one chance to get it perfect, she'll show Lillian and her bridesmaids just how far you'll go for someone you love.

(as Joseph A. Nunez)

The cast spent about two weeks improvising with each other, some of which was incorporated into the movie.

Revealing mistakes:
The rear view mirror of Megan's minivan has been removed.

Brynn:
We would like to invite you to no longer live with us.


OK. After seeing the previews of this movie, it was added to the list
of movies I did NOT have any intentions of seeing. However, I heard so
many great things about it, I decided to give it a try. Let's just say,
my gut feeling was correct. I have NO idea what so many people found so
amazing about this movie.


It's not that funny. Yeah, there were a couple of scenes that I found
humorous, and chuckled. However, most of the "funny" scenes were either
involving sex, about sex, about poop/vomit/farting/burping, or a lame
attempt at slapstick humor. Lots of predictable cheap shots. Seriously,
no sophisticated or classy humor… the whole film made me feel trashy,
honestly. I get that it's rated R, but still. I felt like I was in an
adult version of an equivalent to Spongebob at times.

Small plot. This movie is slowly stretched out for over 2 hours, with a
plot that could easily be explained entirely, with all important
scenes, in about 30 minutes. There were SO many long scenes that seem
to be thrown in just so Kristen Wiig can score another laugh, yet they
don't progress the story. Quite a few plot holes, and there were many
scenes where I caught myself rolling my eyes, thinking, "really?"

The greatest movies develop their characters so much that you literally
feel for their outcomes. I left the theater with no regards to any of
the characters in this movie, because they were all so distant and
under-developed. The plot was so weak and rushed for the next pointless
comedy spiel, that they didn't give the characters any depth, except
maybe the lead of "Annie." I can think of 2 memorable scenes right now
from this film, and I saw it last night. Yeah, there were some funny
scenes, but nothing worth raving about in my opinion.

I do have to give "Bridesmaids" some credit. An all-female leading role
movie is very new in show-business, especially in comedy. Sadly, these
women made the "Hangover" equivalent instead of raising the bar, but
they get Kudos for the efforts. There were some sweet moments in the
movie, that for me, held the film from turning into a complete waste of
money. I do like comedy, but I prefer classier, witty humor instead of
the easy, thoughtless humor. I would much rather watch a movie that
evolves a character so much that the cheap shots aren't needed for
laughs. If you liked "The Hangover," then you'll probably enjoy this
movie..

TagsUSA
Hobo with a Shotgun
The Tree of Life