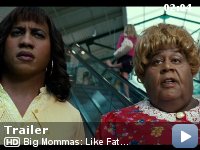 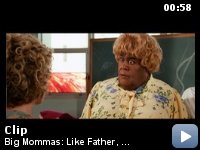 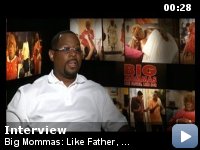 Storyline
FBI agent Malcolm Turner and his 17-year-old son, Trent, go undercover at an all-girls performing arts school after Trent witnesses a murder. Posing as Big Momma and Charmaine, they must find the murderer before he finds them.

Nia Long declined to reprise her role as "Sherry" from the first two films.

Errors made by characters (possibly deliberate errors by the filmmakers):
When Trent / Charmaine (Brandon Jackson) is reviewing his testament, it's incorrectly spelled "testement" in the title of the paper.

Malcolm:
I'm not even wearing a clean pair of Granny panties.

Has it really come to this?

To live in the world of Big Momma, it helps if you have the
intelligence of a box of instant potatoes. That way, Detective Malcolm
Turner (Martin Lawrence) and now his 17-year-old stepson Trey (Brandon
T. Jackson) can pass themselves off as women, despite both of them
looking like they escaped from a bad Saturday Night Live sketch, and
not arouse suspicion. That both of them are able to fool an entire
girl's college campus is one mental hurdle the movie asked of me that I
just could not accomplish.


Of course, given the attempts at humor on display in Big Mommas: Like
Father, Like Son, it probably wouldn't hurt if the audience shared the
same IQ as the characters up on the screen. There's not a single laugh
to be had. Believe me, I counted. But then, that's not surprising when
the film's sole joke was explored to its fullest in 2000's Big Momma's
House. That was the movie where Lawrence went undercover as a 300 pound
Southern granny in order to crack a crime. Somehow, this idea struck a
chord with enough people to see the movie gross over $100 million,
which led to 2006's Big Momma's House 2. It was less successful at the
box office, but here we are with the third film. Not only does the Big
Momma disguise that Lawrence dons look a little more worn out than
before, but Lawrence himself seems confused as to what he's doing back
in the role. It's an encore performance that no one, not even the star,
asked for.

Lawrence is back as Malcolm, although his love interest (played in the
previous two films by Nia Long) is nowhere to be seen. I guess they
couldn't pay her enough to come back, so they explain in dialogue that
she's away at a retreat. This leaves Malcolm to deal with family
problems on his own, such as stepson Trey wanting to ditch a college
education at Duke University, so that he can become a rap artist. Trey
is underage, and needs his dad's signature in order to sign a contract
with a music producer. In what is probably not the brightest of ideas,
Trey decides to follow Malcolm on a bust of some Russian gangsters,
hoping he can corner him and convince him to sign the contract. (I told
you these characters were dumb.) This leads to Trey witnessing a
murder, and having the gangsters gunning after him. Malcolm decides
that the best way for his stepson and him to remain inconspicuous is to
dress in drag, a fat suit, and clothes that look like they were stolen
from a circus clown's wardrobe.

They head for the Georgia All Girl's School for the Performing Arts,
where incriminating evidence against the mobsters has been conveniently
hidden, and even more conveniently, a position for housemother has
opened up. No need for any real credentials or background checks,
apparently. "Big Momma", with Trey posing as her granddaughter, show up
and immediately get wrapped up in campus life, and the various
emotional problems (boys, the stress to be popular and "perfect") that
the students face. The movie can't think of a single funny thing to do
with its premise. Every scene ends with either a tired physical gag
(Big Momma poses nude for an art class!), or sometimes no laugh at all,
just an awkward transition to the next scene. I guess we're supposed to
get caught up in the subplot of how Trey falls for one of the girls at
the school (Jessica Lucas), and is forced to keep his feelings and
identity a secret. All I could think about is how does this girl not
realize that Trey and his female disguise are one and the same person,
especially since she spends ample personal time with both of his
identities?

I don't think I'm spoiling much by revealing that Big Mommas ends with
the gangsters getting what they deserve, and father and son bonding
during their time in drag together. This is an unwanted and
miscalculated comedy that is so lacking in energy and entertainment,
it's mind boggling. Nobody up on the screen looks like they want to be
there, and as the movie dragged on through its overlong 107 minutes, I
felt a connection with them. At least I was feeling something.