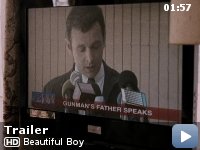 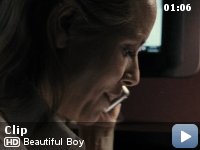 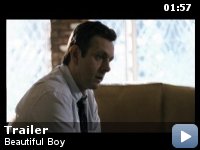 A married couple on the verge of separation are leveled by the news their 18-year-old son committed a mass shooting at his college, then took his own life.

Storyline
Bill and Kate are in an emotionless marriage with their only son away at college. They knew he didn't sound happy but then comes the news that he was the mass murderer at his school killing 17 professors, fellow students and himself. They try to move on with their lives but they are held back by their own grief and the fact that the media and everyone around them view them as monsters. The more they fight it, they realize they only have each other.

Taglines:
To confront the truth, first they had to face each other.

Beautiful Boy is a raw and realistic look at society in which very few filmmakers dare to explore.


Kate (Maria Bello) and Bill (Michael Sheen) have been struggling with
their marriage for years and have decided to give it one final go
before actually calling it quits. One night while planning their huge
family vacation, their son Sam (Kyle Gallner) calls and seems quite out
of it. Both Kate and Bill seem worried but feel that Sam is just having
a rough time during his first semester away at college. The next day,
life goes on as normal until the couple is notified that their has been
a mass shooting at their son's college. Its only a matter of hours
before Bill and Kate's already troubled life gets worse as they learn
that Sam is not only dead, but the one who began to shoot up the
school. A raw, realistic, and heart-wrenching look into our society
ensues…

Man, do I love movies like this! I love movies that dare to tackle
subject matters that our society just completely ignores. Beautiful Boy
is not only a realistic tale about a crumbling marriage, but also a
unique look at the family of a trouble college student who did the
unthinkable. In a time where school shootings are at an all time high,
there comes a movie like this that dares to examine the subject matter
from a unique perspective. For years after mass shooting at various
schools like Virginia Tech, Northern Illinois, and of course the
notorious Columbine, its about time some filmmaker dared to take a look
into this subject and from the parents point of view.

When we hear about school shootings, we always think about the crazy
kid who shot up the school, but we never question for a second, what
about the parents and how are they taking the news. The media tends to
point the blame at the parents and state that they must have screwed
the kid up and caused him/her to do that. Why purely blame the parents?
Why isn't it on our society? The media? Or even just the large amount
of hate in this world. No one can deny that there are some crazy people
in this world, but the question that remains is who is to blame and
what would ever bring a person to take on such horrific action? No one
knows and this film doesn't necessarily answer that questions, but
instead does show how hard the parents not only take the loss, but how
it makes them feel as people who have to live with knowing what their
child is a killer.

While this film not only tackles that difficult subject matter; it also
takes a brutally honest look at divorce and the basic struggles of
every day life. Many husbands and wives stay together for the kids in
our society today. I personally know several people that have stood
together for the years when their marriage was on the rocks. Beautiful
Boy shows this with Bill and Kate throughout the film and how the
couple goes through periods where their love is strong and where it is
weak. There is a huge fight scene near the end of the film in which
Kate and Bill begin to violently argue about the relationship and whose
fault it is that Sam turned out the way he did. That scene would bring
tears to the eyes of any couple who has a kid or wants a child. It is
gripping, raw, and unforgettable.

In order for this film to work as perfectly as it did, it clearly
depended on Maria Bello and Michael Sheen to give realistic and
believable performances. Needless to say, they nail it and gave some
powerful and gut-wrenching performances. The chemistry and tension that
they face is as real as any that I have seen in real life. When they
are happy on screen, you are happy and when they are sad and miserable,
you are sad and miserable. This film is clearly a character study of
Kate and Bill and while there are some great supporting roles its
really only those two who we as audience members are focused on. Bello
and Sheen are the ones knock this film out of the park and give some
truly Oscar worthy performances.

I applaud director/writer Shawn Ku as well as co-writer Michael
Armbruster for creating a film that makes our society look at life,
marriage, and adolescent violence from a whole new perspective. The
script was well written and the scenes were placed perfectly throughout
the film to make the movie keep the audience wanting more. The
emotional scenes in this film were beautifully captured by Shawn Wu,
who seems to have an eye for detail on capturing raw emotion from his
actors. With Wu's direction, Beautiful Boy feels makes the audience
feel as though we are dealing with the events that are taking place on
screen and as filmmakers that is a great accomplishment.

At the end of the day, Beautiful Boy is definitely not the feel good
film of the summer, but is probably one of the most powerful and
realistic films that I have seen in many years. It's real, raw, and
brutally honest and I love that about indie films. I love feeling good
when I go to a movie, but I also like movies that tackle issues that
are relevant to our society today. This film does that and while many
may not appreciate how honest of a film this is, I did and applaud
everyone involved for taking on a film of this caliber. Beautiful Boy
will more than likely be one of those films that around December of
this year that will make it's way onto my " best of" list for the year.