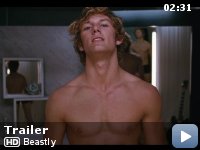 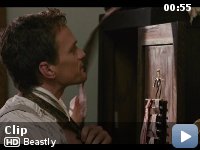 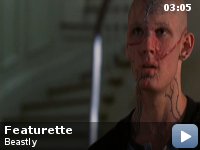 A modern-day take on the "Beauty and the Beast" tale where a New York teen is transformed into a hideous monster in order to find true love.

Storyline
Kyle (Alex Pettyfer) thinks he is God's gift at his high school. He plays a prank on a fellow high school student, Kendra (Mary-Kate Olsen) who, unbeknown to him is a witch. Kendra teaches him a lesson by putting a curse on him making him as beastly on the outside as he is on the inside. He has one year to find someone to fall in love with him or stay like that forever.

Taglines:
It's what's underneath

When Kyle is talking to Will while he is playing darts, the veins/scarring on his back spell out 'ugly'.

Lindy:
What can I say, I'm substance over style.


I wasn't planning on seeing this movie, but after a group of
girlfriends convinced me it would be a good chick flick, I caved.

Going into this movie, I haven't read the book, just seen the Disney
movie quite a few times. I was expecting this tragic love story, just
like the original movie, with plenty of tear-jerking moments, but it
just wasn't there, in terms of script and acting.

The plot was rushed, and therefore the audience didn't have enough time
to appreciate the story line, even though we all know it like the back
of our hands.

Our Beast, Kyle, was more of a brat than a beast, and even after
transforming, I was expecting this monster of rage, and he just whined
and moaned and was more comedic than anything else.

Lindy, who was our Beauty, really only stood as a placeholder for a
gorgeous woman. Vanessa Hudgens is a gorgeous girl, but that's really
all she is. Her acting is very flat, with one moment standing out in
particular. She's just been told some devastating news over the phone
in a conversation that lasts all of 10 seconds. Acting 101: Acting is
the reality of doing, she just pretended, and there's no two ways about
it. I didn't see a role model to young girls in her, I just saw a
pretty face.

However, there were some exceptions, Neil Patrick Harris was impeccable
with his comedic timing, and really saved this movie from otherwise
getting a 1 star. Mary Kate Olsen also pleasantly surprised me, as she
was good at convincing me she was this evil enchantress. However, for
her entire time in the movie, she looks like a haute couture model
rather than this disgusting ugly creature.

Overall, it's not terrible, just not that good. Neil Patrick Harris is
reason enough alone to see this movie, and to get a look into what some
consider "21st Century Beauty and the Beast."