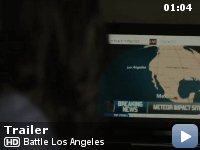 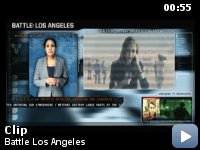 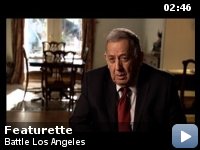 A Marine Staff Sergeant who has just had his retirement approved goes back into the line of duty in order to assist a 2nd Lieutenant and his platoon as they fight to reclaim the city of Los Angeles from alien invaders.

Storyline
Los Angeles and other cities around the world are being bombarded by meteors that seem to be slowing down once they hit the earth's atmosphere. The earth is suddenly being invaded by space aliens that have landed off the shore of LA, and who begin killing everybody along the beach. The military is ordered into action. Marine Staff Sergeant Nantz (Aaron Eckhart), who was about to retire, is reassigned to a new platoon. The platoon, flown by chopper to the forward operating base at Santa Monica Airport, is being led by a new 2nd Lt. Martinez (Ramon Rodriguez). They are sent on a mission to rescue some civilians who are trapped at the police station within alien territory. They only have 3 hours to complete their mission and get out before the Air Force bombs that zone.

Cpl. Oswald's military unit ("40th ID") is a real unit – The 40th Infantry Division (Mechanized), known as the "Sunshine Division", is a modular division of the United States Army. It is a four brigade combat team division with National Guardsmen from throughout the Pacific/Western United States and Oceania. Its Division Headquarters is located at Los Alamitos Joint Forces Training Base in Los Alamitos, California.

Incorrectly regarded as goofs:
In the early scenes set in Camp Pendleton, several A-10's are shown on the flight line. A-10's are flown exclusively by the U.S. Air Force, not the Marines. MCAS Camp Pendleton houses only helicopter squadrons, and fixed wing close air support aircraft such as F/A-18's and AV-8B Harriers would be launched from other nearby Marine bases such as Miramar.

Reporter on TV:
…an unprecedented meteor shower falling off the coast of Tokyo. The entire city is mesmerized by this incredible sight. Two hours after the first contact, an unidentified enemy has reached our coastlines in a swift and militaristic attack. Right now one thing is clear: The world is at war.

Just Saw this Film at an advanced screening in Long Beach.

Battle: Los Angeles is the tale of Staff Sargeant Nantz' last day as a
marine. Without spelling it out or drawing a diagram, the audience and
the marine platoon we are following, are immediately deployed into Los
Angeles for reasons they do not know. Soon we learn that indeed Aliens
are landing off the shore of LA and killing everyone on the beach. The
platoon we are following is sent on a mission to get some survivors
from a gas station several miles from the coast. Generic movie ensues.


The film is shot like Bourne with epilepsy. I'm 21 years old and not
too old to follow the action on screen, its just really, really,
annoying when 80% of the shots are extremely herky jerky close-ups.
There is not a single steady shot in the entire film. Not one. The
intensity of the effect wears off right after the first alien is
killed. After that the movie spiralled downhill deep, deep into the
realm of the cliché. I'm going to name a few character's roles that are
in this film, see if you can recognize them from other films you've
seen. Experienced, hardened leader who gets a new platoon. Young
officer straight out of officer's school who can't handle the action.
Bad ass chick who can shoot. Soft and sweet nurse who gets picked up
along the way. An Asian guy, a black guy, a white dude from the south,
and a rookie make up the main part of the platoon. There is a scene
where tension is high and its just a damn dog making noise. Start to
see where this is going? This movie had some good things going for it.
Its use of silence was well done. The blasting boom of the gunshots
were startlingly realistic. The alien spacecrafts are awesome. The
aliens themselves are pretty cool. Its just that the screenplay is
terrible. SOOOOOO cliché in every way. This is your standard war movie
just with Aliens. The ending is just as cliché as the rest of the film.
Don't fool yourself into thinking it will actually be difficult to beat
the aliens. 0 thought involved.

Hopefully Mr. Liebesman has better luck with the final product of Clash
2 than he did with this. Everyone I saw the movie with thought it was
pretty bad. Movies like this that I totally enjoyed: District 9,
Cloverfield, Avatar (somewhat), City of God (cinematography) and
Blackhawk Down. All much, much better than this.

District 9 and the Bourne Identity had a really stupid baby.