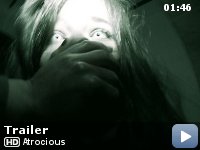 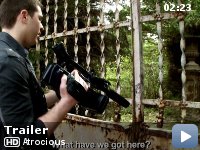 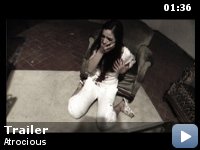 The Quintanilla family was found dead. Recorded evidence was discovered by the police. Production company acquires the confidential material and edits it into a Horror Movie.

Storyline
In April 4th of 2010, Quintanilla family was found murdered in their country side house. Police reported the existence of 37 hours of recorded evidence. "Atrocious" shows the real images of such evidence. Quintanilla family traveled to their old farm house in Sitges, where Christian and July investigated about the Legend of the Girl in the Garraf woods. Both of them used to record all day whatever they did. On the fifth day of their arrival they were found dead under strange circumstances. ATROCIOUS shows the last five days of life for Cristian Quintanilla and his siblings. It also shows the strange situations that they lived in those moments and which remain unexplained.

Nauseous for all the wrong reasons


The film has a very promising premise for any horror fan – a story with
paranormal elements, a small cast and filmed with a hand-held camera
(think of the suspense!). This immediately sets the expectations high –
I was expecting a Spanish Blair Witch Project or perhaps a successful
spin-off of Rec.


In reality, the friends I went to the movies with got nauseous because
of the constant shaking of the camera and I did not flinch once. It
must be said, though, that Atrocious does a good job of misleading the
viewer – something I rather enjoyed, but some others might find
disappointing.

The biggest flaw, however, was that the movie got lost in itself. The
producers were clearly so caught up with the whole
amateur-footage-spooky-places-run-and-scream theme that it engulfed the
whole movie, making everything else that happened inbetween seem like
one long filler. And then combined with the completely unexpected
ending, Atrocious might just leave you feeling a little indifferent
about the whole thing – and nauseous, if you're like one of my friends.

Overall, it's a decent little horror flick, but nothing that would keep
you up at night.