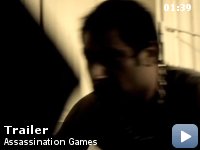 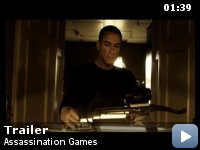 Two assassins agree to work together as one tries to avenge his wife and the other collect a reward for a job.

Storyline
Vincent Brazil and Roland Flint are the two best assassins in the world – but unknown to each other. These two rival assassins form an uneasy alliance to take down a target, which is backed by dirty Interpol Agents.

Vincent Brazil:
57:18 People choose their deaths when they choose how they live.

The Best Film That You Probably Won't See This Summer


Wow! I really got lucky with this one! A Jean Claude Van Damme film
released in theaters for the first time in the United States since 1998
if memory serves right! A very limited release mind you, but he's
finally made it back to the big screen! It hasn't been advertised here
at all which is a shame because Assassination Games is an excellent
film! So where do I begin? Well, the film was shot for $4,000,000
dollars in some Eastern Block country which would normally scare me,
but it actually ends up looking a lot better than the above stated
price tag. Say around the 15 to 20,000,000 dollar range. The camera and
editing work was very well done and the musical score is excellent, non
pervasive and flows with the movie in a non intrusive way that adds to
the dramatic effect instead of taking away from it. The story is pretty
well done. I'd give the dialog a solid B for an action movie and there
were no detectable plot holes that I could find.


The best actor in the film in my opinion was probably Andrew French who
plays Nalbandian who plays Devil's Advocate to Van Damme fallowed by
Maria Kaijan, Jean Claude, Scott Adkins and Ivan Kaye. In fact, the
acting was pretty much all the way around solid except for the interpol
agents who's dialog and delivery was extremely weak.

The film goes about 50/ 50 on the action to drama ratio. It drags a bit
after the first 5 minutes or so but the fight scenes are interspersed
throughout the film well and are also followable which is more than I
could say for some larger budget films like the Transformers franchise
and I would definitely have to say that Jean and Scott make an
excellent action duo as they have the whole fire and ice thing going.

If you happen to be within an hours drive of any of the theaters listed
on the movie website, go and check the film out. It isn't as good as
JCVD or the new Universal Soldier, but it's a very close third. So go
check it out or just wait for the DVD. It'll be worth it! Thank you
Jean Claude! I never thought I'd see you on the big screen again!

The Art of Getting By
The First Grader