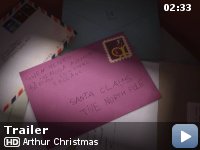 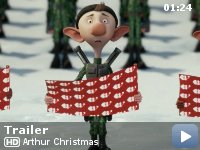 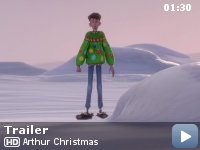 On Christmas night at the North Pole, Santa's youngest son looks to use his father's high-tech operation for an urgent mission.

Storyline
Arthur Christmas reveals the incredible, never-before seen answer to every child's question: 'So how does Santa deliver all those presents in one night?' The answer: Santa's exhilarating, ultra-high-tech operation hidden beneath the North Pole. But at the center of the film is a story about a family in a state of comic dysfunction and an unlikely hero, Arthur, with an urgent mission that must be completed before Christmas morning dawns.

The second consecutive film written by Peter Baynham to have the name Arthur in its title, the first being
Arthur starring Russell Brand.

Errors in geography:
The plot of "Arthur Christmas" includes a Spanish-speaking town named Trelew in Mexico. This is apparently a misplacement of Trelew, Argentina; I cannot find any reference on the 'net or Google Earth to any Trelew in Mexico.


Arthur Claus (James McAvoy) is the bumbling son of the reigning Santa,
Malcolm Claus (Jim Broadbent). Arthur is relegated to the Letter
Department where he can presumably do no damage. Arthur's brother Steve
(Hugh Laurie) is the heir apparent to the title of Santa. Steve is
handsome, confident, and in charge of the North Pole command center
that monitors Santa's gift-giving flight around the world. The film
opens with a bravura set piece showing how Santa is able to stop in
millions of homes in one night. Hint: he has the help of thousands of
elves.


When Arthur discovers that one gift was accidentally undelivered, he
becomes determined to get it to the unfortunate girl before Christmas
sunrise. Even with the help of his retired grandsanta (Bill Nighy) and
a perky elf (Ashley Jensen) from the Wrapping Department, can Arthur
travel around the world in time?

There have been many movies over the years where Christmas must be
saved from disaster, but Arthur Christmas has a very creative take on
it. From the opening scene where it's established that Santa is really
a dynasty through the centuries, a title handed down from father to
son, to the paramilitary operation to get millions of presents
delivered in one night, to the misadventures of Arthur and his
grandsanta as they try to make sure one little girl is not
disappointed, Arthur Christmas is fun, creative, and original. Produced
by Aardman Animations in association with Sony Pictures Animation, this
CGI animated film delivers Aardman's distinct brand of quirky humor and
style.

The art direction maintains the slightly skewed look of an Aardman
claymation film. The character designs are asymmetric and the surface
textures are realistic yet bold. The North Pole command center and
Santa's high-tech sleigh are clean and modern.

Sometimes celebrity voice talent backfires, but here it works
beautifully, the English accents lending a sense of gravity that
heightens the silliness. Bill Nighy is particularly good, conveying
wisdom that is tinged with resentment of the modern gift-delivery
methods his son and grandson use.

Arthur Christmas is a funny, heartwarming, and poignant look at the
Santa Claus mythos, adding a family dynamic that will resonate with
children and adults. I expect Arthur Christmas will become a joyful
holiday favorite for years to come.

TagsMexico
How to Stop Being a Loser
X: Night of Vengeance