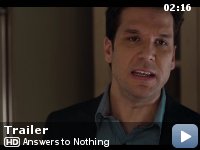 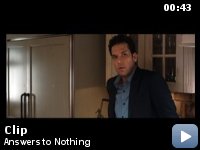 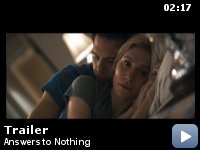 Against the backdrop of a missing girl case, lost souls throughout Los Angeles search for meaning and redemption and affect each other in ways they don't always see.

Storyline
Intertwining stories exploring the bad in the best of us and the good in the worst of us. Against the backdrop of a child abduction case we follow five days in the life of the single parent detective assigned to the case, her best friend whose determination to get pregnant keeps her from confronting her husband's infidelity, a school teacher and his obsession with the missing child that pushes him to the edge of vigilantism, a beat cop grieving over the violent death of his wife, a recovering addict and her wheel chair bound brother preparing for the LA marathon, and a self-loathing African American TV writer's search for love.

Taglines:
Sometimes its the small steps we take in life that reveal themselves later to be the most courageous ones.

I can't help but believe that somewhere within "Answers to Nothing" is
the great film I very much wanted it to be. Told as a series of
interweaving subplots linked together by a single event, it touches on
a number of issues that are both fascinating and compelling, including
infidelity, recovery, loss, intolerance, love, faith, and strength of
character. It features a decent cast, led by Dane Cook in his first
dramatic role since the deliciously enjoyable 2007 crime thriller "Mr.
Brooks." It had, in short, all the right ingredients. Unfortunately,
the film falls victim to indecisive editing, character overload,
implausible dramatic situations, and surprisingly unconvincing
dialogue. All of this rests squarely on the shoulders of director
Matthew Leutwyler, who's also the co-writer and editor.

Taking place in Los Angeles, we meet a plethora of characters whose
lives are in some way touched by the disappearance of a young girl.
There's Frankie, the detective assigned to the case (Julie Benz);
although she has yet to prove it, she seems convinced that the girl's
neighbor, Beckworth (Greg Germann), is responsible for her
disappearance. Indeed, he gives off creepy vibes in every scene he's
in. He even makes the grossly impertinent gesture of asking Frankie out
to dinner during his interrogation. Frankie's friend, an attorney named
Kate (Elizabeth Mitchell), is attempting to get pregnant through in
vetro fertilization. So badly does she want a baby that she initially
fails to see then turns a blind eye to the infidelity of her husband, a
therapist named Ryan (Cook). He has been dating a fledgling rock singer
named Tara (Aja Volkman), who gets gigs but has yet to get her big
break.

Ryan doesn't believe in anything, love least of all. He's angry at his
father for abandoning his mother and not telling her the truth. His
mother, Marylin (Barbara Hershey), is unquestionably the happiest
person in the whole film, although it's obvious she gets by on nothing
more than blind faith. She tried to instill this in Ryan by repeatedly
telling him the highly romantic story of how his grandparents met
during World War II. Whether or not it happened in the way she tells
it, no one knows for sure. I'm not criticizing her for being this way;
I'd take happy lies over sad realities any day of the week and twice on
Sundays. She even makes a good point about how her love for Ryan lacks
empirical evidence. The only way he knows that she loves him is because
he believes her when she tells him so.

We now branch out further into subplots that are either (a) so
distantly related to the child abduction subplot that they seem to
belong in another movie, or (b) are so badly developed that they should
not have been included in the first place. Kate's current client is a
recovering alcoholic named Drew (Miranda Bailey), who's fighting her
parents for custody of her brother, Erik (Vincent Ventresca), a former
runner who's now a vegetable. She seeks redemption by entering herself
and Erik into the L.A. Marathon, and by training hard for it.
Meanwhile, we learn that Frankie is a single mom. In her only
significant scene, Frankie's adolescent daughter (Karley Scott Collins)
has a highly staged conversation with her teacher about Martin Luther
King. The teacher, Carter (Mark Kelly), spends most of his time playing
internet fantasy games. He has also, for reasons known only the
filmmakers, become obsessed by the missing girl case.

Then there's Ryan's patient, a self-loathing black woman named Allegra
(Kali Hawk). A television writer, she soon meets and begins dating a
white man named Evan (Zach Gilford), who sits in a booth and balances
the sound for Tara's band. Something might have developed here had it
not been merely a subplot. It deserved a film of its own. As it is,
Evan is essentially a non-entity, and the root of Allegra's problems –
including an extensive and arbitrary list of things she hates – remains
undiscovered. Finally, there's Carter's neighbor, Jerry (Erik
Palladino), who's introduced when he pulls over Tara for speeding. In
due time, we see him scanning the obituaries and attending very
specific funerals.

Inevitably, some will compare this film to Paul Haggis' "Crash," in
which Los Angeles is the setting for several interweaving stories that
address social issues. Unlike this Oscar-winning masterpiece, "Answers
to Nothing" is terribly unfocused. It spends too much time on certain
subplot, not enough time on others, and develops all of them with the
idea that there truly are answers to nothing. Certain scenes seem to
have been included for purposes no greater than creating drama, most
notably an unprovoked and unbelievable confrontation between Carter and
Beckworth late in the film. Many passages of dialogue, including
Marilyn's observations about faith and love, sound less like flowing
theatrical conversations and more like sermons from a speech and debate
class. It always makes me sad when a good idea is ruined by bad
execution.

TagsLAUSA
Malice in Wonderland
Even the Rain