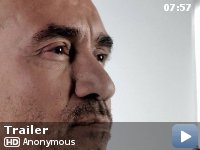 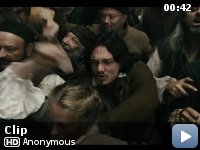 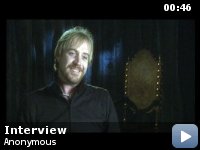 The theory that it was in fact Edward De Vere, Earl of Oxford, who penned Shakespeare's plays. Set against the backdrop of the succession of Queen Elizabeth I and the Essex rebellion against her.

Storyline
The theory that it was in fact Edward De Vere, Earl of Oxford, who penned Shakespeare's plays. Set against the backdrop of the succession of Queen Elizabeth I and the Essex rebellion against her.

Taglines:
Was Shakespeare a Fraud?

Vanessa Redgrave and Joely Richardson play the older and younger versions of Queen Elizabeth respectively. In real-life they are mother and daughter.

Factual errors:
When Ben Jonson first arrives at the home of the Earl of Oxford after being released from prison the Earl is shown cutting, holding, smelling, and then referring to a white and red rose as "The Tudor Rose". "The Tudor Rose" is actually a heraldic emblem of England that is a combination of the white rose and the red rose of the House of York and the House of Lancaster, respectively. It is not, nor has it ever actually been, the actual bloom of a rose bush.

Young Earl of Oxford:
How could you possibly love the moon when you have first seen the sun?

One of the best films of the year

Actor George Dillon has said, "The purpose of drama is to challenge
people and to make people see things slightly differently." The
challenge is laid down in stunning fashion by German director Roland
Emmerich in his latest work, Anonymous, one of the best films of the
year. Focusing on two of the most important events of the Elizabethan
age: the Essex Rebellion of 1601 and the succession to the throne of
Queen Elizabeth I, the film supports the premise that Edward de Vere,
the 17th Earl of Oxford, a prominent aristocrat and court insider, was
the real author of the works attributed to William Shakespeare, plays
and poems of romance, tragic political intrigue, and comedy that
contain such a compelling beauty and searing intensity that, after 400
years, still reach directly into our hearts and remain there forever.


Described as a "political thriller", Anonymous creates an atmosphere of
foreboding and intrigue that, like many films of the genre, begins with
a jumble of names, images, and flashbacks that challenge us to sort it
all out. We are not certain of anything, but Emmerich invites us, in
the words of Diane Ackerman "to groom our curiosity like a
high-spirited thoroughbred, climb aboard, and gallop over the thick,
sunstruck hills." Steering us through the maze of Tudor history, the
film makes credible the startling events of the time, providing an
authentic recreation of London in the 16th century with its crowded
theaters and raucous audience, cluttered streets, and court royalty
decked out in fine jewels.

Though some may point out historical inaccuracies in the film,
Emmerich, citing Shakespeare in Love as an example, says that the film
contains an "emotional truth" rather than a literal one because "the
drama is the primary concern." He need not have had concern on that
aspect. Through Emmerich's direction, the writing of John Orloff, the
cinematography of Anna Foerster, and the superlative performance of an
all British cast including Oscar-worthy performances by Vanessa
Redgrave as Queen Elizabeth I and Rhys Ifans as Oxford, Anonymous
succeeds both as an authentic drama and a plausible explanation for
many of the problems surrounding the authorship question. While the
film may lack a certain depth of characterization, it more than makes
up for it with style, spectacle, and an involving story.

To some, the film may be skating on narrative thin ice, Emmerich,
however, told an interviewer that "if we provoke, let's provoke all the
way," and provoke he does. According to Anonymous, de Vere, in addition
to being Shakespeare, was also the illegitimate son of the Queen and,
in 1573, the father of a son with Elizabeth, Henry Wriothesley, the 3rd
Earl of Southampton (Xavier Samuel). Emmerich handles the subject of
incest with great taste, with neither the "Virgin Queen" nor Oxford
knowing the truth until close to the end of their lives. After a brief
prologue by actor Sir Derek Jacobi, the film begins with the arrest of
playwright Ben Jonson (Sebastian Armento) by faceless men in knight's
armor in the middle of a theatrical performance.

The author of the play is a well-known writer who, though he is soon
released, is taken to the Tower and accused of sedition and slandering
the State by the mere act of authoring a play, the mark of a
totalitarian society reflecting a growing disdain for the arts. The
film then flashes back five years, then forty years, as we become
acquainted with the young Earl of Oxford (Jamie Campbell Bower), taught
by highly educated tutors with access to a vast library in the home of
William Cecil (David Thewlis), where he was brought up as a ward of the
court after his father's death. We also witness his marriage to a
teenage Anne Cecil (Amy Kwolek), daughter of William, a marriage that
never produced any lasting satisfaction for either party.

As we return to present time, Oxford is forced to hide his identity
because of the biting satire of his plays that lampoon some of the more
prominent members of the court, and also as a result of a political
arrangement that becomes clearer later in the film. His initial choice
to front for him is the same Ben Jonson but Jonson refuses, passing the
mantle to Will Shakespeare (Rafe Spall), an actor for the Lord
Chamberlain's Men who seizes the opportunity. In a superbly comic
performance, Spall portrays Will as an illiterate money-grubber who can
barely speak coherently but is willing to sell his name to Oxford at a
premium cost. The heart of the plot, however, focuses on the attempt to
seize power from Cecil's son Robert, an episode that is known to
history as The Essex Rebellion of 1601.

This insurrection, led by Robert Devereaux, the Second Earl of Essex
(Sam Reid) results in his beheading and the imprisonment of Southampton
who is sent to the Tower awaiting certain death. Oxford's attempt to
persuade Elizabeth to save their son results in a political deal that
makes us privy to why Oxford was never able to reveal his authorship of
the Shakespeare canon. While some critics may proclaim the movie a
moment of singularity that indicates the end of the world as we know it
(even before 2012), Anonymous may have the opposite effect, opening the
subject to a wider audience who may be able to view Shakespeare and his
times from a totally new perspective.

In Robert Heinlein's "Stranger in a Strange Land," Jubal said we're
prisoners of our early indoctrinations, "for it is hard, very nearly
impossible, to shake off one's earliest training." If my intuition is
correct, the prison gates will soon be swinging wide open, and the
shaking will begin in earnest. As Victor Hugo said, "Nothing is more
powerful than an idea whose time has come."