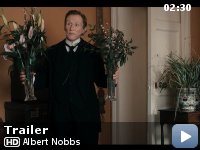 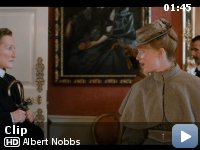 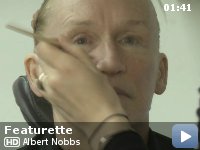 Albert Nobbs struggles to survive in late 19th century Ireland, where women aren't encouraged to be independent. Posing as a man, so she can work as a butler in Dublin's most posh hotel, Albert meets a handsome painter and looks to escape the lie she has been living.

Storyline
In 19th century Dublin, Albert Nobbs, an eccentric man in the latter part of middle age, works as a waiter in Morrison's Hotel run by the stingy and controlling Marge Baker. Albert is hard working and saves his money so that one day he will be able to eke out a better life for himself by owning his own business rather than work at the hotel. Beyond his work colleagues, he is all alone in the world. One day, a man named Hubert Page is hired by Mrs. Baker to paint one of the rooms in the hotel. She forces Hubert to share Albert's bed for the one night he is required to stay to complete the work, much to Albert's horror. Hubert discovers the reason Albert did not want to share a room with him. But rather than the issue being a problem, Hubert shows Albert that he can follow a slightly different life path than the one he envisioned for himself – one closer to the life that Hubert leads with his wife Cathleen…

Taglines:
A man with a secret. A woman with a dream.

As a producer, Glenn Close was highly involved in the casting process. She went to Broadway and offered the role to Janet McTeer and called 'Jonathan Rhys-Meyers' and John Light, who played her sons in
The Lion in Winter.

Dr. Holloran:
Why aren't you in fancy dress?

Dr. Holloran:
Well I'm a doctor. We are both disguised as ourselves.

Give Close the Oscar!


At first glance, Albert Nobbs could seem to be another dry and stuffy
period piece that would follow in the tradition and be mostly about the
acting. However once you delve into it, the film ends up being a
surprisingly dense character drama focused around one troubled,
courageous woman whose loneliness gets the better of her years of
living in secrecy. The titular waiter is a delicate, frail woman
masquerading as a man and actress Glenn Close delves into the role with
such complete detail that she truly does disappear.


I'm always skeptical of performances that are claimed to be "fully
unrecognizable" and at first I must admit that it just felt like Close
playing a man, but as the film continued I slowly lost sight of my
cynicism and when a later scene portrays Nobbs wearing a dress for the
first time I was blown away at the fact that I was seeing this woman be
a real woman for the first time. I was amazed at how absorbed Close was
in the role, I genuinely forgot all about this woman playing a
character and just believed the character's facade, as well as Close's.
Close has gotten attention for the role as a potential Oscar vehicle
and some have lashed back against that due to the performance being
quite restrained, but I admire her delicacy in taking on the role. This
is a woman who spent her entire life trying to blend in and be unseen,
and Close's ability to be this fly on the wall creature is remarkable.

I was glad that there weren't any hysterics on her part and when the
few scenes came where, in isolation, she broke down I was devastated by
this woman fearing for her life to unravel. It's such a delicate and
entirely human performance, and as far as I'm concerned one of the best
of Close's very strong career. The central narrative revolves around
Nobbs' desire to woo a young maid named Helen (played with an Irish
tilt by the up-and-coming Australian Mia Wasikowska, again shining) to
leave their life of servitude and open up a tobacco shop together.
Throughout the film I was bothered by this belief that Nobbs was
supposed to be in love with Helen and that's why she wanted to open the
shop with her, but as the film reached it's final conclusion I came to
the realization that it had nothing to do with love.

Throughout her life Nobbs had put in all of her effort to having no one
notice her that when she's introduced to a similar woman masquerading
as a man (played by the strong and unbelievably convincing Janet
McTeer) who has a happy life married to a woman, Nobbs realizes the
potential that maybe she doesn't have to live her life alone. It's not
about loving Helen at all, it's just about not wanting to be alone
anymore and once that became apparent to me the film became quite
devastating. Nobbs trapped herself in this prison and Close plays it
with such restrained heartache that it truly hit a level with me. Even
in writing this I am realizing that the film had a much stronger impact
on me than I had previously thought. This is a devastating story of a
woman trapped in circumstances of her own making, portrayed with such
genuine believability by Close that I forgot I was watching an actress
pretend to be a man but instead just saw Nobbs.

There's a line where McTeer's character asks Nobbs what her name is and
she responds, "Albert". Then McTeer repeats the question, clearly
asking for her birthname instead of the one she is hiding behind and
Nobbs again responds, "Albert". At the time I rolled my eyes at the
exchange, but now that the whole film has settled with me it speaks so
much to this trapped, wounded soul who was so lost in herself that she
couldn't escape her own prison, let alone the one that she had built
for Nobbs. I found Albert Nobbs to be quite the moving, hushed
character piece led by a wrenching performance by Close and backed up
by several other strong performances from McTeer, Wasikowska and a
grimy Aaron Johnson.