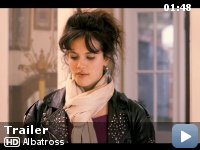 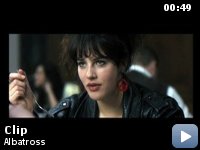 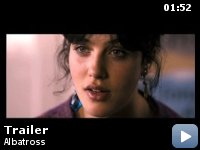 Beth, a bookish teenager, befriends Emilia, an aspiring novelist who has just arrived in town. Emilia soon begins an affair with Beth's father that threatens to have devastating consequences.

Storyline
Beth, a bookish teenager, befriends Emilia, an aspiring novelist who has just arrived in town. Emilia soon begins an affair with Beth's father that threatens to have devastating consequences.

The birth of another British star


Introducing a new mega-star: Jessica Brown Findlay. Some films are
destined to remain in the shadows of the stars they create. Albatross
is one of those films.

The story follows Emelia, a rebellious, seductive and intelligent
teenager played by Brown Findlay. Taking a job as a cleaner at a guest
house, Emelia befriends the teen daughter of the house, begins an
affair with the husband and gets scowled at by the wife and mother of
the family who live there.

Alternating between comedy and drama, the film has an awkward tone. The
writer Tamzin Rafn claims it was written as a comedy but there are only
occasional really funny moments. Instead, it is the drama that is more
gripping with a range of characters who are trapped in miserable lives
in a beautiful but dead-end location. Filmed with a great eye for
scenery on the breathtaking coast of the Isle of Man by director of
photography Jan Jonaeus, the narrative takes in the kids on the
beaches, the family in the guest house and most notably Emelia and new
friend Beth. But these disparate people all appear confined and
resigned to unfulfilling and disappointing existences.

Emelia's snarky way with words brightens and amuses what could be a
depressing film. There are laughs to be had and there is hope for a
better life for many of the characters, but the film is dealing with
some serious issues like Alzheimer's, suicide and unfulfilled
potential. Perhaps director Niall MacCormick saw an opportunity to
inject more drama into what could have been a fluffier lightweight
British comedy and went for it.

The cast are all excellent, Sebastan Koch all guilty nervous ticks,
Julia Ormond neglected, spiteful and probably the saddest character in
the story. But Felicity Jones and Jessica Brown Findlay carry the
weight of the film and are believable opposites, angel and devil,
bookworm and loose cannon. Brown Findlay particularly shines with comic
delivery of vicious put-downs but also scenes of more hefty emotional
weight. It is the moments spent with Emelia's grand parents that help
to explain the actions of this troubled young woman and will keep
audiences sympathising with what could have been a one-dimensional
typical teen tearaway.

See it for the scenery, the performances and for the drama. Witness the
making of a star! Writer Tamzin Rafn and star Jessica Brown Findlay
attended a screening and answered questions from the assembled audience
on Monday (03/10/11) night. Thanks to LoveFilm as always for another
great opportunity to hear from the people involved.