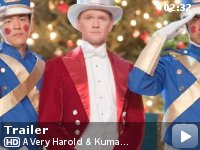 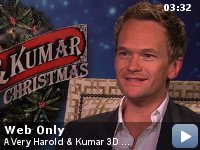 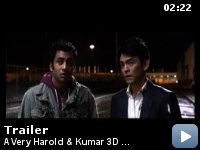 Storyline
Six years have elapsed since Guantanemo Bay, leaving Harold and Kumar estranged from one another with very different families, friends and lives. But when Kumar arrives on Harold's doorstep during the holiday season with a mysterious package in hand, he inadvertently burns down Harold's father-in-law's beloved Christmas tree. To fix the problem, Harold and Kumar embark on a mission through New York City to find the perfect Christmas tree, once again stumbling into trouble at every single turn.

It was Todd Strauss-Schulson suggested casting Danny Trejo after making a Photoshop picture of him wearing a Christmas sweater.

Continuity:
In the beginning, the TV Kenneth gets for Kumar's father-in-law is a Sharp 3D TV. However, later the TV the family is watching appears to be an early Samsung LCD TV, with the large circle on the bezel. They are also wearing passive 3D glasses, which only LG TVs from 2011-onwards would use. Sharp currently use active 3D technology in their 3D televisions.

Kumar:
Uh, miss, I'm sorry, but I'm not going to let you rape my friend on Christmas Eve.

Why laugh? Why not?

I don't know why, but I seriously can't help but laugh at the Harold
and Kumar movies. They're so over the top and silly that you can't help
but laugh. The first adventure we went on with them, they just had the
munchies and needed some White Castle. The second adventure was to get
the loves of their lives back and end up going to Guantanamo Bay. Now,
we get to celebrate the joyful holiday of Christmas with them. I admit
that when I saw the trailer for this one, it didn't make me laugh too
much. I wasn't sure if this was going to have the same kick as the
previous films had, but A Very Harold and Kumar Christmas not only
delivered in the laughs but was actually a very good movie that in it's
own crude way was a touching story about how friends can grow apart but
reunite by the weirdest situations.


Harold is now a successful businessman who works at a popular company
while Kumar is still living the life of a stoner handling a bad break
up with Vanessa. At Maria's Christmas party, Harold meets Maria's
father. He explains to Harold that he never had a perfect Christmas and
he is counting on Harold to make this one the best for his daughter,
Harold's wife Maria. Maria's father also brings to Harold's house the
perfect Christmas tree. When a package addressed to Harold arrives at
Kumar's apartment, he decides to deliver it to Harold. The package
turns out to be a large marijuana joint that Kumar cannot resist
smoking. Since Harold has gotten married and does not get high anymore,
he knocks the lit joint out of Kumar's hands and it lands in the tree
and causing a fire. So now Harold and Kumar are on a new adventure to
get the tree back before the family returns.

I know that the situations were out of control. We have some dark jokes
with a child taking every extreme drug known to man, we have Neil
Patrick Harris on the verge of raping a woman. I know I should have
been disturbed technically, but why not just have a good time and
remind yourself that this is just a movie? I thought Neil Patrick
Harris was just too funny as usual when the boys ask him where he's
been and that he got shot and branded a hooker, he replies with "can
you be more specific?", I almost died laughing. I loved the creepy
waffle making robot that Kumar had, how it actually loved Kumar and
saved his life. But the moment that really got to me was seeing the kid
who was on every crazy drug running around on the ceiling, it was so
out there that I just had to laugh.

Like I said, there are some very extreme jokes that a lot of people
will take offense too easily. There is a moment where Neil Patrick
Harris is talking about Heaven and I know that if you have strong
religious beliefs, you're not going to like that scene. Though I don'
know why then you are seeing a Harold and Kumar movie since they're not
listed in the tactful department. But what I really liked about this
story is that it showed their softer side, Harold is growing up and
Kumar wants to stay the same as a stoner who is just cruising through
life, we all have friends like that and it's hard to keep in touch when
you're on different paths. I loved seeing them remember what's
important, that it's OK to let go a little bit or that it's OK to grow
up. I would recommend this for the fans, it's a great follow up to our
favorite stoners. If you're looking for a good laugh, I think you're in
for a treat, Harold and Kumar do not disappoint.