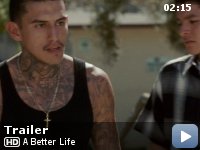 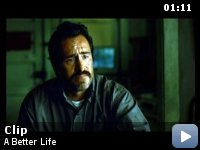 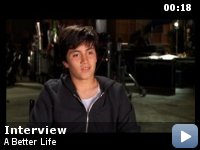 A gardener in East L.A. struggles to keep his son away from gangs and immigration agents while trying to give his son the opportunities he never had.

Storyline
A gardener in East L.A. struggles to keep his son away from gangs and immigration agents while trying to give his son the opportunities he never had.

Taglines:
Every father wants more for his son

Director Chris Weitz liked to do all the dangerous scenes in the script before he asked his cast to perform them. A stunt double taught Weitz and Demián Bichir how to climb a palm tree, and although Weitz was first to successfully climb one, Bichir did go on to film all the scenes himself, without a stunt double. Weitz told the audience at a SAG Screening: "That is why in my films there are not many scenes that require stunt doubles".

Carlos Galindo:
This truck is my only chance to grow this into something big. So we can move out of here and get you in a better school.

– Kirk Honeycutt, film critic for the Hollywood Reporter and host of
the UCLA film course where we previewed this movie immediately compared
it to Vittorio De Sicas's 1948 classic film The Bicycle Thief . In it a
man and his son search for a stolen bicycle vital for his job. Fast
forward to the present time as Carlos, an undocumented immigrant,
(played by Mexican super star Demian Bichir) and his teenage son
(played by Jose Lulian, an American making his acting debut ) are on a
similar quest. They are searching for Carlos' stolen truck which he
bought with borrowed funds to give him his one chance to make a decent
living as a gardener and pay off his debts. Where the original Italian
movie painted a picture of the poverty in post war Italy, this film
provides an insight into life in East Los Angeles with its poverty,
gangs, immigrants desperate for work and living with constant fear of
being deported. It captures the poignancy and the dilemmas of hard
working immigrant families in cities like Los Angeles who are trying to
survive and provide a better life for their children while one step
away from being arrested and sent home. The screenplay by Eric Eason is
short on words but crystal clear in the emotional impact which it
provides not only with the stark reality of the situation that the
father and son are faced with but in the emotional struggle that each
of them must feel. Bichir's performance could not be better as his face
tells his story as does his words in both English and Spanish (with
appropriate subtitles). Veteran director Chris Weitz teamed with award
winning Spanish cinema photographer Javier Aguirresarobe to put
together a realistic vision of the characters and environment which was
filmed in 69 different locations in Los Angeles. Despite the
effectiveness of the film, there are no clear villains and no new calls
for action. While there may be a morsel of hope there is also the
depressing possibility of a never ending line of people with crushed
dreams. The film, itself, is an amazingly powerful and authentic
glimpse into the human story that is part of the "intractable
immigration issue." The emotional pull precludes over
intellectualizing. (2011)


TagsUSA
The Art of Getting By
The First Grader