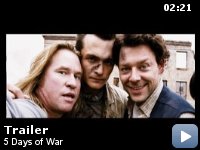 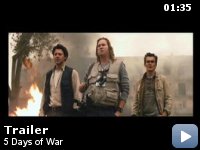 A drama set centered around the war between Russia and Georgia, and focused on an American journalist, his cameraman, and a Georgian native who become caught in the crossfire.

Storyline
A drama set centered around the war between Russia and Georgia, and focused on an American journalist, his cameraman, and a Georgian native who become caught in the crossfire.

Taglines:
Their only weapon is the truth.

Near the beginning, president Saakashvili can be seen munching on his necktie. This was based on an actual incident, in which the president was caught on camera while chewing on his tie, unaware that the camera was rolling. The footage has been widely translated, and can be easily found on YouTube.

Anachronisms:
In the film, the Russian soldiers wear stripes with a national flag on the right sleeve. In reality, all the armed forces of the Russian Federation wear those stripes on their left sleeve.


My hopes were high for this movie. The War between Georgia and South
Ossetia/Russia in August of 2008 would seem to be a great background to
a well-plotted, carefully crafted film that captures all the intrigue
of the Caucasus. Since the Caucasus have always been a nest of ethnic
divisions, political double-dealing and vicious banditry I would think
any decent screenwriter and director could piece together a fairly
intense thriller, I was so wrong. 5 Days of War is a twisted train
wreck of special effects laden action and blatant propaganda with a
parade of terrible acting. This film was disappointing on many levels.
About 40 minutes into the film I realized I was watching a $20,000,000
piece of pro-Georgian anti-Russian propaganda. If anyone does a little
research on this war they will clearly see that both sides committed
illegal acts under international law. Georgia is actually blamed for
triggering the war by using heavy artillery on a city unprovoked which
killed civilians, Russian Peacekeepers and damaged large tracts of the
city. Once the war began some Ossetia militias fighting with the
Russians committed acts of ethnic cleansing and were not stopped by the
Russian Military or Government. Shame on them and shame on Georgia for
bombarding a city. I do not have a dog in this fight, I think that the
problems of that part of the world should be answered by the countries
and governments of that region. It is obvious that the filmmakers feel
that we should clearly be supporting Georgia with their charismatic
leader Mikheil Saakashvili played by Andy Garcia who is portrayed as a
Georgian Thomas Jefferson or JFK. Why the hell did they use Andy Garcia
anyway? This movie does nothing to help the outsider with the
complexities of the actual situation. I want to know what the target
audience was for the filmmakers. I was insulted by this film. Why would
they take such a complex and historical subject and simplify it down to
this? Westerners are natural allies of the peace-loving, compassionate
Georgians therefore the obvious "Bad Guys" are the Russians and South
Ossetians who bring murder, terror and misery upon the progressive
Georgians. The world isn't so black and white and even us dimwitted
moviegoers can appreciate the intricacies of politics in the Caucasus.
The protagonist of this wreck is an unlikeable American journalist
(Rupert Friend in a career ending role) who jumps head first into
danger because of his troubled past. He is surrounded by a cadre of
American/British journalists (Val Kilmer, Kenneth Cranham who are both
wasted as ridiculous caricatures) who drink hard, take big risks and
are always crying about how nobody cares about what is going on in the
world. At all times they are protected and working directly on behalf
of a group of saintly Georgian soldiers. They do not even pretend to be
impartial and objective. The contrived role of Tatia (Emmanuelle
Chriqui) is another low point in a film filled with an excruciating
level of inaccuracies, clichés and thoughtless dialogue. Special
effects are strong, location looks beautiful but the storyline and fact
every major character is played by an American or British actor and not
native Georgians/Russians is thoughtless and insulting (insulted
again). ONLY WASTE YOUR TIME ON THIS FILM IF YOU HAVE TIME TO WASTE AND
REALLY WANT TO HAVE YOUR INTELLIGENCE QUESTIONED. A TRAVESTY.