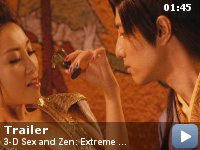 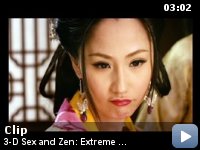 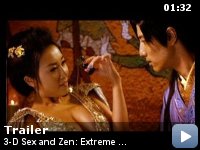 As a conceited scholar of the Ming Dynasty, Wei Yangsheng believes that since life is short, one should pursue the ultimate sexual pleasure as time allows…

Storyline
As a conceited scholar of the Ming Dynasty, Wei Yangsheng believes that since life is short, one should pursue the ultimate sexual pleasure as time allows. Wei Yangsheng encounters Tie Fei the Taoist priest's daughter, Tie Yuxiang, on an occasion. With the former's talent and the latter's beauty, they fall in love at first sight, and Wei Yangsheng is later married into the Tie's family. Yuxiang is elegant and courteous under the influence of her father's faith, though her lack of passion cannot fully satisfy Wei Yangsheng's sexual needs. His disappointment is no less than his affection for her.

The Elder of Bliss


A 3D sex movie, especially one produced in Hong Kong and especially one
with a pedigree such as the Sex and Zen movies from the 1990s, should
be a lot of fairly harmless fun. There should be plenty of double
entendres (and single entendres!), plenty of bosoms heaving out across
the audience, and a plot that is as uncomplicated as the sexual
positions are complicated.


For the most part, '3D Sex & Zen: Extreme Ecstasy' is that film.
Extremely handsome boy meets extremely beautiful girl. They make a lot
of love, but something's not right. So, the handsome boy goes off to
consult various masters in hopes of improving things. That's the first
half of the film. Rather unfortunately, the second half turns to
violence, sadism, rape and torture, and where five minutes ago one was
chuckling about the protagonist declaring "I must make love to ten
women at the same time", suddenly one is faced with genital mutilation,
followed by rape, then more genital mutilation, followed by… Well,
you get the idea with that one.

I suppose a film has to go in a direction, and a sex film especially,
once the thrill of seeing the actors and actresses naked has waned
somewhat. It can become increasingly absurd and nihilistic, like many
Russ Meyer films; change tack and take in another exploitation genre
(such as, ummm, 'Zombie Strippers'?); or go for a message, which more
often than not is 'actually, this much sex isn't that good for you'
(take 'Austin Powers', if you will). 3D Sex & Zen goes somewhere
between all three, and despite being about 20 minutes too long, somehow
fails to deliver satisfactorily on any count.

The message that it does have is sweet, however, and understandable to
people of all nations. And there's something charming about the fact
that in Hong Kong, 3D Sex & Zen made more than Avatar on its opening
day. Overall, it's worth a watch, perhaps more for what it is than what
it says.