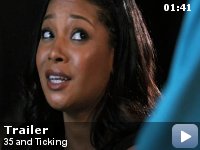 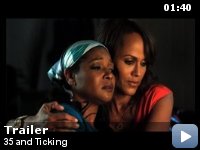 A romantic comedy which looks at a group of thirty-somethings trying to figure out life, love and marriage.

Storyline
Centers around the lives of Victoria, Zenobia , Clevon, and Phil — all friends approaching the age of 35 and struggling to build the families they've always dreamed of. While Zenobia (Parker, "Soul Food," "Brown Sugar") is still looking for a man, Victoria (Jones, "Castle," "One on One") is married to a man who doesn't want children. Clevon (comic Hart, "Not Easily Broken," "40 Year-Old Virgin"), meanwhile, is too geeky to get a woman, and Phil (Keith Robinson, "Dreamgirls") is already married with children, but his wife is not very interested in being a mother. All four of them try to rectify their romantic lives and futures while their biological clocks tick away.

Taglines:
When it comes to love, it's all about the timing.

Not quite Up-To-Parr, but enjoyable nonetheless…


Having just watched a slew of African-American films such as Jumping
The Broom, This Christmas, Soul Food, Breakin' All The Rules, Two Can
Play That Game, & it's counterpart Three Can Play That Game, I thought
I would add this film on my list to watch…my other reason being my
interest in watching the careers of some of my favorite black actors
like Meagan Good and Mike Epps.

The film itself was enjoyable…a bit unrealistic, but enjoyable. The
film was well casted with some of the most humorous black actors we
have in this industry today…I can't say I am too familiar with Nicole
Ari Parker's work, but she did a very decent job on this film, bringing
lovable, relatable warmth and humor to her character Zenobia. The
amazing gorgeous Tamala Jones was a delight to watch (if I had a wife
her age with a beauty and a killer bod like hers, I'd consider myself
the luckiest bastard on earth). Kevin Hart is quite humorous, at times.
Mike Epps is funny as ever…maybe even steals the show. The simply
stunning Meagan Good was a refreshing sight for sore eyes, having just
seen her in JTB.

I can't say much about the writing. I admire Russ for coming up with a
storyline about four best friends in their mid to late 30's still
trying to make sense of their love lives, especially with 40 creeping
up on them pretty quick. I bought some of the situations that some of
the characters went through, yet others seemed highly unrealistic, or
if it was, the subject was approached in a very harsh, careless manner
in an effort to generate sympathy for the characters. The ending of the
movie kinda threw me off…way off (won't spoil it for anyone)…it
just seemed thrown in there as a last minute ditch effort to complete
the script and bring closure to the characters' arc. If anything, it
didn't seem like quite the happy ending that they had hoped for…they
just seemed to…settle with what they could get.

On the Technical side, things were even more awry. One could possibly
make the assumption that to save on the budget for this film, a group
of film school students were whisked away right after graduation to
work on this project. Much more notable than others was the sound
editing…in some parts of the movie it was fine…maybe probably
easier for the sound people when working indoors, but when filming
outside, a complete disaster. The ADR, if any, was abysmal…the
background noises didn't quite match as they were edited (yes, I know,
very picky…but believe me, quite noticeable)…in a seemingly simple
scene of four characters having a conversation, in one shot, the sound
seems fine, but when it cuts to another shot, the sound is way off, as
though someone or something in the background was blasting tunes next
door when that shot was being filmed. No effort made to edit out the
clearly mismatching background noises. The cinematography wasn't
horrible, but it could've been much much better. In some of the indoor
locations, it seemed as though not much effort was used to make full
use of the location…the actors always seemed confined/compressed to
one spot…maybe to make room for all the lighting and crew in the room
with them…not much movement. The editing…no comment. I just
re-iterate that maybe film students were used on this one…maybe.

The casting, I had no problem with it, although I am now noticing a
trend in over-using the same actors over and over again…Meagan is in
practically every African-American film that has recently come
out…but I guess it must be a good thing if she's trying to get some
more exposure as an actress…Mike Epps as well. As well, very
noticeable, the film only seemed confined to use a certain number of
actors, maybe due to budgetary constraints…(this could be a spoiler,
or not), but some of the secondary characters 'conveniently' kept
popping up at the utmost opportune moment….maybe to help serve the
story's purpose, I don't know…you'd have to see the film to know what
I am talking about.

Overall, despite it's noticeable flaws, 35 and Ticking was an enjoyable
film to watch. It had a few punches here and there, but it did it's
job. Not quite up to par, but enjoyable nonetheless…

TagsJTB
Malice in Wonderland
Even the Rain