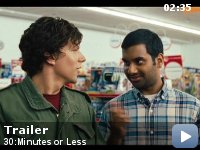 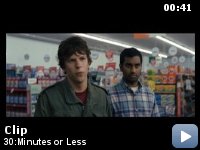 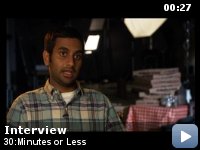 Two fledgling criminals kidnap a pizza delivery guy, strap a bomb to his chest, and inform him that he has mere hours to rob a bank or else…

Storyline
The not so smart Dwayne intends to open a massage parlor with his partner Travis, but he does not have money for the investment. He decides to hire a hit-man to kill his father, The Major, who won a large amount of money in the lottery years ago, but the killer demands US$ 100,000 for the job. Dwayne and Travis kidnap the pizza delivery boy Nick and they dress Nick in a vest with a timer and several bombs. Then Dwayne tells Nick that he has ten hours to rob US$ 100,000 from a bank. Once he does, he would give Nick the code to release the vest. Nick summons his best friend Chet to help him in the heist but the scheme does not work the way Dwayne has plotted.

When Nick is talking to Kate for the first time, it is mentioned that he doesn't have a Facebook account. Nick states that he is "off the grid". In fact, Jesse Eisenberg, who plays Nick, also played Mark Zuckerberg, the founder of Facebook in 2010 film
The Social Network.

Factual errors:
The bank guard's gun could not have fired as depicted. A blow to the hammer of a modern double action revolver (like the one carried by the guard) cannot cause a discharge because the hammer block safety remains automatically engaged until the trigger is pulled.

Dwayne:
Sometimes faith pulls out its big ol' cock and slaps you right in the face.


This could have been a fun movie…there is a plot, the casting is
good…but once again, we have a prime case of screen writers who
really aren't. It's as if, in half the movies these days, and this is a
perfect example of one, the writers have no clue as to how to write
dialogue, so they decide to talk dirty for an hour and a half and call
it good. It isn't. It's awful. If this is still the remains of trying
for shock value in movies, it doesn't work anymore. It's boring. It's
dull. It's repetitive. Viewers don't want shock value. We want
entertainment. Somewhere out there in Hollywood land, there have to be
writers who can actually write – who have imagination – who have
creativity. But, unfortunately, none were hired for this movie. Blah!

TagsUS USA
The Help
The Skin I Live In