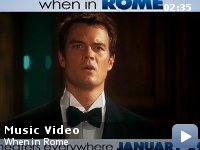 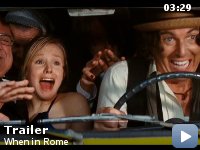 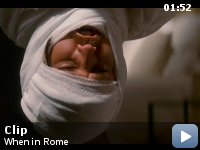 Beth is a young, ambitious New Yorker who is completely unlucky in love. However, on a whirlwind trip to Rome, she impulsively steals some coins from a reputed fountain of love, and is then aggressively pursued by a band of suitors.

Storyline
Beth is a hard working career woman whose last relationship says that she puts her work above him so he left her. When he tells her he found another career woman and is willing to stick it out with her and is engaged to her. Beth feels that there is no one for her. And when she goes to Rome to attend her sister's impromptu wedding and after meeting the best man, Nick she's attracted to him but after seeing him with another woman, she gets drunk and goes into the famed Fountain of Love and takes some coins thrown by people looking for love. When she goes back to New York four men start coming onto her. And Nick keeps calling her asking her out. She later learns that what she did–is a no no. It seems legend says that if you take a coins out of the fountain the person who threw it will fall in love with who took the coin. So she has to find a way to break the curse. And she wonders if Nick whom she likes is with her cause he wants to or is he under the spell.

Taglines:
Did you ever wish for the impossible?

The gallery's final "main" piece, "a photo by Petruccelli entitled 'The Hit'", was named after the movie's Production Designer, Kirk M. Petruccelli.

Revealing mistakes:
During the cab ride scene when Beth just arrived, the footage can be obviously seen sped up as the pedestrian on the left side of the screen is seen walking 3x then slowed down to 2x as the cab passed by.

Hansom Cab Driver:
It only takes a moment to see true beauty.

Water would be more nutritious

Hollywood brings yet another pointless re-assemblage of stale ideas,
preposterous events, plot loopholes, and ridiculous conveniences though
which one could drive a galaxy, and I don't mean the Ford version.
Nothing worth mentioning, really, but for one brief restaurant scene
that was truly funny for its concept, though not its execution.


Girlfriend insisted so we went to the screening. Saw it for free and I
was still annoyed. Will rue the lost ninety minutes on my deathbed.
Being stuck in traffic with a full bladder would have been preferable.
I suffered so you don't have to.