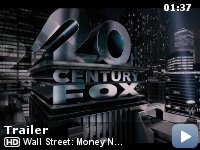 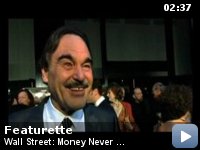 Now out of prison but still disgraced by his peers, Gordon Gekko works his future son-in-law, an idealistic stock broker, when he sees an opportunity to take down a Wall Street enemy and rebuild his empire.

Storyline
As the global economy teeters on the brink of disaster, a young Wall Street trader partners with disgraced former Wall Street corporate raider Gordon Gekko on a two-tiered mission: To alert the financial community to the coming doom, and to find out who was responsible for the death of the young trader's mentor.

Music is used to atmospherically link the movie with
Wall Street. Much of the soundtrack of both films is provided by Brian Eno and/or David Byrne of the Talking Heads. In fact the Talking Heads song "This Must Be The Place (Naive Melody)" is used in both films.

Jacob Moore:
Every thief has an excuse.

Even Money sleeps in this movie

I had high hopes for this film ever since I saw the teaser trailer of
Gekko getting released from prison. It has everything you need for
success. Iconic characters, interesting subject, good acting and great
cinematography. Unfortunately I was greatly disappointed by snooze fest
with a meandering story with no focus and some strange "green" message.

The movie starts off trying to set up LeBeouf's characters motivation.
But even that is never clear. Is he financially or morally invested in
some fusion project or both? Does he want to get his girlfriend and her
father back together for her or because he wants a new mentor? Is he a
greedy Wall Street guy with great ideas or is he some Eco-warrior
trying to change the world? And then there's some half assed revenge
plot against some financial tycoon who ends up embodying the entire
financial meltdown.

Through out the film the audience is drug along as these plots come and
go. At one point the most important thing to the main character is
getting revenge against Brolin's character and ends up working for him.
But instead of getting revenge, he try's to get an investor in green
technology. When his boss, who's he trying to take down, doesn't invest
in the green technology LeBeouf's character breaks down and quits. So
he forgets revenge and returns to getting his girlfriend back together
with her father Gordon Gekko. At some point Gekko mentions he left his
daughter $100 million which, strangely enough, is the exact amount that
he wanted his last boss to invest in the green company. So he starts
tricking his girlfriend into signing all the money over to her father
who has promised to give it to the green company. LeBeouf's character
is the only person on Earth who doesn't know that a guy who went to
prison for insider trading might not be trust worthy. So surprise,
surprise Gekko runs off with the money and we are treated to a ripoff
of The Usual Suspects as LeBeouf thinks back to all the situations that
showed Gekko is lying. So he goes back to revenge.

So all of that along with more uncomfortable close ups of a girl crying
then I can count, a number of strange transitions and the worst cameo
I've ever seen with Charlie Sheen showing up as Bud Fox. He appears out
of nowhere for no reason with two girls on his arm acting more like
Charlie from Two and a Half Men than Bud Fox.

All of this happens at a snails pace and makes you wonder if Stone has
seen the first film in 20 years. I'm waiting for the sequel to Platoon
where we skip the battle scenes and focus on a girl crying and some
general who makes weird bird noises after every line.