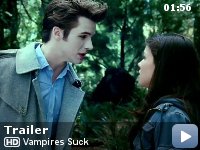 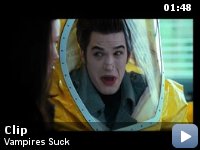 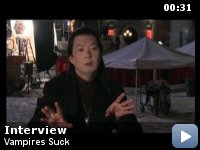 A spoof of vampire-themed movies, where teenager Becca finds herself torn between two boys. As she and her friends wrestle with a number of different dramas, everything comes to a head at their prom.

Storyline
A spoof of vampire-themed movies, where teenager Becca finds herself torn between two boys. As she and her friends wrestle with a number of different dramas, everything comes to a head at their prom.

Crew or equipment visible:
When Alice is climbing out of the hole, someone throws a cell phone in her face. The hand of the person throwing the phone appears briefly on the right side of the screen.

Becca Crane:
So are we going to be uh, at the same school?

Jacob:
I go to school at the reservation.

Becca Crane:
Oh, it must be fun to gamble and drink all day.

An improvement on the previous spoofs, but not saying much


Becca, an anxious, non-vampire teen, is torn between two boys. Before
she can choose, Becca must get around her controlling father, who
embarrasses Becca by treating her like a child. Meanwhile, Becca's
friends contend with their own romantic issues – all of which collide
at the prom.


VAMPIRES SUCK will surprise many people because it's an improvement
over the previous spoof films directors Jason Friedberg and Aaron
Seltzer have been churning out for the past couple of years. However,
that's like saying it's the better crap of all crap. The jokes still
aren't funny and the filmmakers still don't realize the difference
between satirizing and copying. But I would be lying to myself if I
said I didn't find some good that came out of this film because there
are some improvements.

First of all, the performances are great by the two leads. In her first
film, Jenn Proske does a dead on impersonation of Kristen Stewart.
However, it's sad to see her in this because I think she's better than
this. Matt Lanter also does a great impersonation of Robert Pattinson
in his "pain" look. I don't know what made Ken Jeong come aboard the
film but he's basically playing the same character in THE HANGOVER.
He's not in the film that much, though. Also, I think it's pretty great
that Carmen Electra isn't in here and I'm sure others will agree.

The second obvious thing that stuck out to me was that the film focused
on only the first two TWILIGHT films. The filmmakers finally learned
that spoofing 600 movies is a bad thing. Saying that, the film still
does have the many pop culture references, some too random to comment
about. Fortunately, they really did tone it down quite a bit compared
to the previous films where you get one every five seconds. You
probably get one every five minutes here.

I also liked the fact that it looked like an actual film because if you
saw MEET THE SPARTANS and DISASTER MOVIE, you'd know the films were
filled with shoddy sets made up in ten minutes. In here, you might
question if they stole the sets and locations from the TWILIGHT films.
I don't know if this counts as something good but I really think the
film manages to create a decent storyline from the first two TWILIGHT
films.

Overall, the film is still bad because it's rarely funny, although I
will admit I laughed at some bits that took a jab at the TWILIGHT
series. If the story is better than the jokes itself, you know you got
a bad comedy. It's an improvement from the last few spoof films, but
that doesn't say much. I really don't recommend seeing it at all. If
you must, just rent it on DVD that will inevitably come out a month
after the film is released.