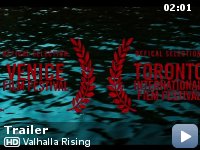 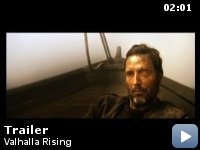 1000 AD, for years, One Eye, a mute warrior of supernatural strength, has been held prisoner by the Norse chieftain Barde…

Storyline
1000 AD, for years, One Eye, a mute warrior of supernatural strength, has been held prisoner by the Norse chieftain Barde. Aided by Are, a boy slave, One Eye slays his captor and together he and Are escape, beginning a journey into the heart of darkness. On their flight, One Eye and Are board a Viking vessel, but the ship is soon engulfed by an endless fog that clears only as the crew sights an unknown land. As the new world reveals its secrets and the Vikings confront their terrible and bloody fate, One Eye discovers his true self.

The official website for the film refers to Mads Mikkelsen's character as Harald. In the film, however, he is only ever referred to as One-Eye.

Miscellaneous:
The closing credit for "Technical Support" has a typo error "Techincal".

Eirik:
God brought us out of that mist for a reason. We claim this land in His name.

Kare:
How do we do that? We're half starved. Three men dead, one missing.

TIFF 09: The boy said he was from hell … Valhalla Rising

Sometimes a movie comes along that is almost indecipherable, but for
reasons unknown, still can't be shaken from my consciousness. Nicolas
Winding Refn's Valhalla Rising is one such example. It concerns a
one-eyed, mute Norse warrior's quest to discover his lot in life and/or
death … I really don't know which. It could have been the fatigue of
being the fourteenth movie seen in less than four days at the Toronto
International Film Festival, or perhaps it was intentionally vague to
utilize its mood and gorgeous environments as the true focal points.
Winding Refn said before the screening that he always wanted to shoot
in an exotic place, and this was the chance to make that a reality. So,
with the lavish hillsides of Scotland, he and co-writer Roy Jacobsen
brought a tale of Vikings searching for the Holy Land—or a place to set
up a new one—with them, listening to heavy metal in order to get into
the mindframe of the hell that would take over. I do think all involved
understood that the story would be left up to audience interpretation,
making it more a journey rather than a strict plot, because star Mads
Mikkelsen left us with a cryptic message himself before the projector
started going. He said, "Sit back, relax, and enjoy that imaginary
joint." It all starts with Mikkelsen's One-Eye in captivity, being used
as a fighter against other Norse tribes' best—able to take a beating
and always shell out more to achieve victory. Helped by a young boy,
Are, (played by Maarten Steven), he soon escapes and kills those
holding him captive, taking the boy with him as he travels on, visions
of red violence coming into his mind, leading him to an inevitable
fate. Using the boy as translator to those they cross paths with, a
bond is formed between the two, one that holds One-Eye accountable to
protect him no matter what. Eventually finding passage with a Viking
vessel of Christians, the captain of which sees the use of having a man
of his powers as an ally, a fog soon rolls in as they sail to an
unknown land. Conditions become dire as food and drink deplete and the
water surrounding them becomes salty and undrinkable. Tensions run high
and blame is passed to the warrior, calling him a beacon of evil,
already having been told by the boy that he came from hell.


The visions become more frequent as we wonder if One-Eye is going
insane, is a vessel himself for a higher being, or just supernatural in
both strength and mind. Red soaked passages eventually come true in the
dull, cold palette used to show reality. Violence runs rampart
throughout, allegiances, tenuous at best, and survival playing a large
role in everything. Maybe this God of a man is some sort of reaper
taking the Vikings on a journey to their destruction or perhaps he has
only involved them in the trip to his own, but either way, the graphic
nature of combat and battle—dirty and personal, just as you'd think it
would be with savages such as these—is prevalent at all times. Right
from the start we are exposed to the gruesome fights, seeing two men
battle in the mud, feeling each punch connect, a battle ending with the
decapitation of the loser by the chain holding the victor in place so
as not to escape. Brutal in execution and still beautiful in its
hellish visuals, one cannot deny the power of image.

Winding Refn's Vikings are physical specimens of humanity, not exactly
giants, but fierce in their mentalities and demeanors. You would not
want to get into a fistfight with any, as they would rip you apart limb
from limb. It is this gritty realism that helps in the success of the
movie, showing this world as being without rules and governed by
strength. The leader will be the general that can keep the rest safe,
his hold of power only as strong as the respect given him by those he
leads. It only takes one moment of weakness to become expendable,
killed and tossed to the side as the next warrior rises up. But then
you have One-Eye, a man who could take on anyone or all and be
victorious. He is not out for the glory or riches that come in war; he
is on a spiritual march to whatever future is coming to him in bits and
pieces when he closes his eyes.

Norse mythology is often made into large blonde men wearing horned
helmets and furry clothing, weapons at hand to bludgeon and beat.
Valhalla Rising doesn't buy into these clichés or stereotypes, instead
digging deeper into the mentalities of these people, the rage and
religious fervor that lives inside. The Christians want to find
salvation or safety of some form, and they aren't afraid to spill blood
to find it. So it becomes a combination of mythology and Christianity
and survival, men without answers on a journey through hell, or into
it. I was a little surprised to hear that distribution rights were
purchased after it screened in Toronto, not because it doesn't deserve
them—it is a cinematic feat that earns the right to be seen and
dissected—but because of its lack of mainstream appeal. So much of the
movie is internal, watching actors act without words, making the
audience think and decipher what is going on. I just hope the Hollywood
machine does not fall into the trap of selling it as a battle royale of
Vikings on the sea, a 300 type epic adventure. That would be the
greatest disservice of all. The film merits an audience of
introspective thinkers and open minds to let the sumptuous nature of
all on screen—whether beautiful or disgusting or both—wash over them
and grab hold. It isn't so much a movie to be seen, but one to be
experienced.