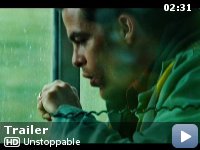 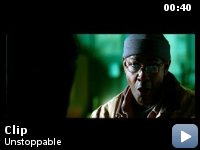 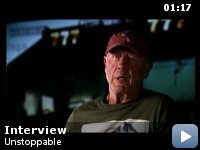 With an unmanned, half-mile-long freight train barreling toward a city, a veteran engineer and a young conductor race against the clock to prevent a catastrophe.

Storyline
Unstoppable is a drama about a runaway train carrying a cargo of toxic chemicals. Puts an engineer and his conductor in a race against time. They're chasing the runaway train in a separate locomotive and need to bring it under control before it derails on a curve and causes a toxic spill that will decimate a town.

Ironically, a train used in filming accidentally derailed in Bridgeport, Ohio on November 21, 2009 while being shot for the production. No one was injured in the incident, but production was halted for the remainder of the day.

Continuity:
As Frank is running along the top of the train near the end of the movie, we see Connie clutching her cellphone as she watches the news. However, when Ned arrives alongside the train, she picks up the phone to call him. He hangs up on her and she is then clutching the phone anxiously as she continues watching the news coverage.


If you've read the synopsis above, you pretty much know the long and
short of Tony Scott's "Unstoppable". Based on the real-life story of an
unmanned train that went careening down the tracks in Ohio after a
railroad employee failed to set the air brakes while switching tracks,
this dramatization of that little incident amps up the thrills for a
white-knuckle 100-minute non-stop roller-coaster ride- just think of it
as an adrenaline shot that pretty much grabs you by the throat and
doesn't let go from start to finish.


The setup is plain and simple- on one end of the track is rookie
conductor Will Colson (Chris Pine), paired with veteran railroad
engineer Frank Barnes (Denzel Washington) on his first day of work.
Frank and Will each have their own share of family problems and each
bear their own reservations of the other- so there's a fair bit of
tension between the two of them as they begin their shift, especially
since Will is seen as the company's new blood employed to replace the
older workers (including Frank) who have one by one been forced to
retire.

Then on the other end of the track, some bumbling employee gets off a
train in an attempt to switch tracks, puts the stick in throttle and
sends the massive locomotive whizzing down rural Pennsylvania towards
the more heavily populated areas. Corporate- represented by Kevin
Dunn's VP of operations- and local ground operations- represented by
Rosario Dawson's rail commander- can't agree how to stop it, the former
as usual weighing the options in terms of dollars and cents on the
stock market.

It is only halfway through the film that Frank and Will cross paths
with said locomotive nicknamed "The Beast" and come out with a plan to
link their engine to the back to it and gun it in the opposite
direction. Tony Scott spends the first half of the film doing two
things- one, emphasising the working-class backgrounds of Frank and
Will; and two, laying out bare the peril of the situation. Both are
deftly played for the nail-biting finish, which is guaranteed to leave
you wide-eyed and open-mouthed.

By portraying Frank and Will's as everyday men with real concerns over
livelihood and family, Scott and "Die Hard 4.0" writer Mark Bomback
make the point loud and clear later on that that real-life heroes are
really just ordinary men who do extraordinary acts of courage in the
face of danger and calamity. Indeed, though it is apparent that both
Frank and Will are the heroes of the story, playing down the
chest-thumping heroics of their act proves to be a wise choice in
painting them as regular people who rose to the occasion to save the
lives of thousands, including their families and loved ones.

Scott instead stresses the magnitude of the occasion in repeated failed
attempts at halting "The Beast", each and every attempt highlighting
the destructive force of the locomotive at that weight and at that
speed. Choosing to film the high-octane action sequences in a more
straightforward realistic manner than his usual flashy visual style
(i.e. jump cuts, shaky camera, zooms and colour-correction) also lends
the proceedings an authentic and an altogether genuinely riveting feel,
further underlining the gravity of their heroic act. Special mention
goes to the sound design of the film, which in a proper theatre with
good sound system will set the hall rumbling with the sound of the
locomotive.

Because much of the focus of the film is on "The Beast", more screen
time seems to be dedicated to the train than to our two lead actors,
Denzel Washington and Chris Pine. Still, the ever-reliable Denzel
Washington delivers a low-key but no less commanding performance as the
dutiful railroad worker Frank. He also shares a nice buddy chemistry
with Chris, and it's interesting to watch how the initial tension
between the two gives way to mutual cooperation, understanding and
finally respect.

Unfolding at a breathless pace, Tony Scott makes the most of a simple
premise to deliver a relentlessly exciting action movie that plays like
"Speed" on tracks. It wastes no time in getting to the meat of the
action, and doesn't once let up right until the end of the thrill ride.
In between, you get the story of two men, folks like you and I, who
display an outstanding act of heroism when faced with imminent danger.
Precisely because they are so relatable, "Unstoppable" becomes so much
more gripping, and you'd be advised that this high-octane action movie
is just the adrenaline fix you need for the week.

TagsUSA
To Save a Life
Brotherhood