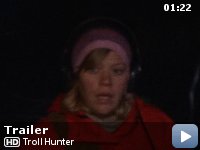 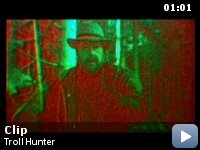 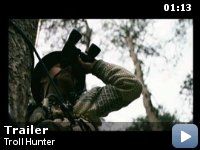 A group of students investigates a series of mysterious bear killings, but learns that there are much more dangerous things going on. They start to follow a mysterious hunter, learning that he is actually a troll hunter.

Storyline
When bears are found dead in Norway, the students of the Volda University Thomas, Johanna and the cameraman Kalle decide to investigate. They stalk the trailer of the mysterious hunter Hans expecting to find an explanation for the killings. The reluctant Hans tries to flee from the youngsters, but he agrees that they film him in action provided they follow his orders. Sooner the trio of students learns that Hans is actually a troll hunter that works for a secret government agency. Further, several dangerous trolls have escaped from their territory and Hans is assigned to eliminate them.

Taglines:
You'll believe it when you see it!

The HDDs used by the students are LaCie Rugged portable drives.

Audio/visual unsynchronized:
The subtitles use the term "jotnar" (in the film, a sub-type of troll) for singular and plural interchangeably. "Jotnar" is in fact plural, singular being "jotunn," which the characters can be heard saying on the original dialogue when they're talking about only one.

Hans, trolljegeren:
Have you got all the troll footage you need?

A ten of ten, but maybe not for foreigners?


This movie deserves allot of praise, simply for how well it plays on
the Norwegian cultural memes. Visually it is also quite good, as it
show of the landscapes and places in which the folklore of trolls
actually arose, and of course spices it with lovely computer graphics
when needed. The graphics merge very well with the mockumentary style,
and the movie itself falls between categories, mixing comedy, action
and fake amateur documentary style.


The bad sides are simply that it lacks a bit of flow at times, and of
course, the biggest drawback of them all, one which only applies for
foreigners: it's a very very Norwegian story. I saw it with my
Portuguese girlfriend, and she thought it was okay. I briefed her on
our fairy tales before seeing it, but jokes like the three sheep on the
bridge are hard to catch, or appreciate, without being marinated in our
culture for a long time. One other issue for me was actually the cameo
appearance of two Norwegian comedians, something which slightly spoils
the illusion. Others might disagree.

I suspect this movie would be a seven or six of ten if I was not
Norwegian, simply for its concepts, but because it is so rich to me, I
give it a ten despite its flaws. You'll love this movie for its visual
side, and some of the drama is also great. For Norwegians, this is a
must see. For everyone else, it might be exotic and neat, and offer you
some relief from classical Hollywood monster depictions.

And should you get curious after seeing it, Google for "Theodor
Kittelsen", and "Asbjornsen and Moe" (: Enjoy!

TagsNorway
The Other Woman
Hatchet II