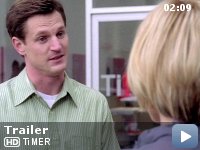 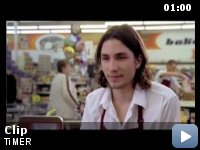 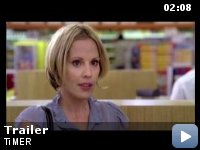 If a clock could count down to the moment you meet your soul mate, would you want to know?

Storyline
When implanted in a person's wrist, a TiMER counts down to the day the wearer finds true love. But Oona O'Leary faces the rare dilemma of a blank TiMER. Her soul mate – whoever and wherever he is – has yet to have a TiMER implanted. Staring down the barrel of thirty and tired of waiting for her would-be life partner to get off the dime, Oona breaks her own rules and falls for Mikey, a charming and inappropriately young supermarket clerk with a countdown of four months.

Taglines:
What if a clock could count down to the moment you meet your soul mate?

Emma Caulfield also co-stars with the Timer matchmaker Kali Rocha in
Buffy the Vampire Slayer as demon friends who later become antagonists, much like their relationship in Timer.

Continuity:
When Oona and Mikey are in the kitchen, at the end of the movie, the eggs are rearranged between takes.

Brian:
Am I late?

Brian:
We are, right?


I attended the World Premiere of "TiMER" at the 2009 Tribeca Film
Festival. This is one of those "sweet little indies" I look for at
festivals. They are few and far between but finding a film like this
makes it worth the effort.


"TiMER" is, on the face of it, a romantic comedy. But its premise is so
original and offbeat — the film crosses over into the science fiction
genre — that, like the best indies, it's hard to pigeonhole. The basic
idea (not a spoiler since this is revealed even before the opening
credits) is that an implanted device on a person's wrist counts down to
the moment the wearer meets his/her true love. It's based on the notion
that everyone has one soulmate out there, somewhere, and each person's
timer will go off at precisely the same moment when the fateful meeting
takes place.

Emma Caulfield's poignant performance leads the way as the orthodontist
Oona, who shares a uniquely powerful bond with stepsister Steph. This
gives Steph a private window into Oona's true vulnerability. Caulfield
is simply angelic, with a light that shines from within. Steph is a
slightly domesticated punk girl, with an acerbic wit to match. Enter
John Patrick Amedori as Mikey. To Oona, he appears as a shallow,
uneducated supermarket checker with a hopeless future. Mikey is like an
unruly dog who's outgrown his puppy years while retaining the innocence
of youth which is undeniably appealing to Oona. Amedori wins the comedy
award hands down, with the film's funniest lines and the ability to do
more with inappropriate facial expressions than any dialogue could.
Those expressions elicited the biggest laughs from the festival
audiences. Desmond Harrington plays Dan the Man, buttoned-down and
well-meaning, with a slightly brash exterior that can be endearing when
he makes the effort. The talented supporting cast couldn't be better.
Watch for Hayden McFarland as younger brother Jesse, who won the
affection of the audience with some of the most heartfelt scenes in the
movie.

The dialogue is often hilarious with an authenticity that not only
comes from Schaeffer's brilliant script but also from improvised
moments between Caulfield and Amedori. Their unlikely relationship and
on screen presence is simply magical.

Production values belie the film's low budget. The look is warm and
welcoming, with soft lighting and a palette of colors evocative of a
stack of fresh linens. Andrew Kaiser's soundtrack sets just the right
tone as the opening credits roll, using a theme crafted out of the
melodies found in old music boxes and windup clocks. The film is shot
by cinematographer Harris Charalambous in a similar fashion, as though
each scene, each shot, matches the ticking of a timepiece. Combined
with Peter Samet's efficient editing, the pace of the film keeps its
timing appropriately consistent.

From the opening shot of a parking meter face, to the numbers on Oona's
alarm clock, to the timer signaling that her morning coffee is ready,
the film hammers home the message that clocks rule our lives. We rely
on these mechanisms to determine our every move. In "TiMER's"
alternative universe — the film actually takes place in a "what if?"
present rather than the future — the question is asked, "what if
timers ruled our love lives, too?" Would you obey the predetermined
destiny of the device or would you follow your heart?