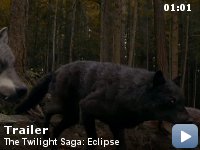 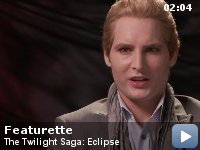 As a string of mysterious killings grips Seattle, Bella, whose high school graduation is fast approaching, is forced to choose between her love for vampire Edward and her friendship with werewolf Jacob.

Storyline
Bella once again finds herself surrounded by danger as Seattle is ravaged by a string of mysterious killings and a malicious vampire continues her quest for revenge. In the midst of it all, she is forced to choose between her love for Edward and her friendship with Jacob — knowing that her decision has the potential to ignite the struggle between vampire and werewolf. With her graduation quickly approaching, Bella is confronted with the most important decision of her life.

Taglines:
It all begins … With a choice

David Slade has stated that most of Nikki Reed's fight scenes at the climax were left out because the dailies that came back from the lab were underexposed and the shooting schedule would not allow him and the crew to reshoot her parts.

Incorrectly regarded as goofs:
When Jacob shows up at Bella's school his hair appears to be wet and lying flat. However when he and Bella arrive at Sam's house his hair is fully dry. Since it is about a fifteen to twenty minute motorcycle ride from Forks to Sam's house on the reservation and Jacob doesn't wear a helmet, it is completely possible that his hair dried in the wind on the way. Also, his temperature (and therefore his head) runs very hot, which may have helped speed up the drying since his hair is very short.

Jacob Black:
And she broke her hand.
[pause]

Jacob Black:
It was a complete misunderstanding.

The wife owes me big time!


It took my wife nearly a week of constant begging to take her to see
Eclipse. After having endured the first two movies and the subsequent
years of self therapy to erase the memory, it took a lot of persuasion
to guilt trip me into seeing this one as well.


Needless to say, I entered the movie theatre mentally preparing myself
for two hours of torture. Frankly, Eclipse was just as bad as I had
expected despite reassurances from female co-workers that "It is much
better than the last one… honest." I've never read the books nor do I
plan to. I know nothing of the author however, I'm guessing she started
writing this stuff when she was a twelve year old girl with delusions
of what love should be.

This entire movie is nothing more than a very poorly written romantic
dilemma, wrapped in a weak premise of vampire and werewolves in an
attempt to lure extra interest. So far as stories go this one has no
vigour or power what-so-ever. Depth? I've stepped in deeper puddles.

Approximately 80% of this movie is dedicated to examining the lead
female's conflicting emotions. Does she want the vampire or the
werewolf? Does she understand the lifestyle choice that comes with that
decision? Is she willing to accept the risks? Does she understand the
impact it will have on those around her? And finally… does anyone at
all actually care? Yup, for two whole hours. (Six if you include the
first two).

So surely this movie has some redeeming features? Perhaps the acting?
Wrong. Stewart's (Bella), emotions range from mildly irritated to
slightly concerned whilst trying to maintain an air of vulnerability
that irritates instead of earning sympathy. For Pattinson (Edward),
it's all about just looking pretty and his acting skills are reduced to
nothing more bowing his head slightly so that he always appears to be
gazing upwards in an attempt at looking intense. As for Lautner
(Jabob), well we all know he can't act so he is reduced to a shameless
and topless eye-candy prop.

In summary? Women are from Venus and men are from Mars. If you're a
guy, you'll hate this. If you're a woman… you might like it. I'm not
trying to belittle the sexes, it's just that type of movie.

Anyway, the wife can beg all she wants… there ain't no way I'm taking
her to see the fourth one!