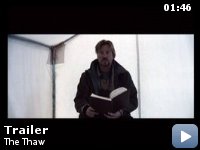 A research expedition to the Arctic discovers that a melting polar ice cap has released a deadly prehistoric parasite.

Storyline
At a remote Arctic research station, four ecology students discover the real horror of global warming is not the melting ice, but what's frozen within it. A prehistoric parasite is released from the carcass of a Woolly Mammoth upon the unsuspecting students who are forced to quarantine and make necessary sacrifices, or risk infecting the rest of the world.

Taglines:
Extinction will find you.

During his time as a teacher at the Center for Arts and Technology Director Mark A. Lewis used parts of his screenplay for The Thaw in his Directing the Actor class.

Dr. Kruipen:
My name is David Kruipen. What is sacrifice? What does it mean to make a real difference? Throughout my life and career I have straddled two worlds. Increasingly I have become respected. Increasingly my books and articles are published and read. Increasingly I have been embraced by policymakers and referenced by bureaucrats, but today I realize that I have… misguided myself. Today I rediscovered what I knew when I was young.


The premise: A prehistoric bug is discovered in melting Arctic ice by a
renowned global warming alarmist (Val Kilmer). The bug reproduces by
infecting people. A small group of students attempt to contain the new
infestation.

The Thaw offers more suspense than it does horror, though there are
some jumpy and/or gory moments. The CGI bugs are just convincing
enough, and the other effects are good. While the plot revolves largely
around Kilmer's character, he doesn't get very much screen time.
However the other actors were engaging enough that I didn't find myself
missing him all that much.

The story starts with Kilmer and his team, beginning the movie's more
mysterious element. It then switches to the students for their rather
straightforward horror-genre struggle against the bugs. The Kilmer part
of the story is revisited in the end, to wrap up the mystery with a
twist. Having the mystery lingering in the background was a nice touch,
as it added some extra intrigue to carry me through the movie.

Nothing to write home about, but competent film-making and moderate
entertainment throughout. Has lots of blatant public-service messages
about global warming, too, if you've got the stomach for that.