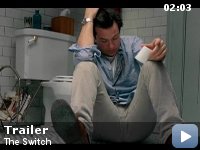 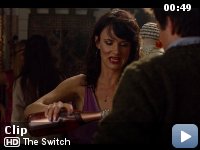 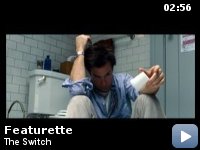 Seven years after the fact, a man comes to the realization that he was the sperm donor for his best friend's boy.

Storyline
Kassie (Jennifer Aniston) and Wally (Jason Bateman) are best friends. Being unlucky in love, Kassie has decided to have a child using artificial insemination. Wally doesn't like this idea, but he isn't capable of admitting to himself, let alone to Kassie, that he's in love with her. At Kassie's artificial insemination party, Wally gets very drunk and spies the sperm donor's sample in the bathroom. Wally was way too drunk to know what he did that night, and Kassie has moved away because she doesn't feel that New York City is a place to raise a child. Now 7 years later, Kassie has moved back with her son Sebastian. While she is looking to get Roland (the sperm donor) more involved in their lives, Wally can't help but notice the many striking similarities that he and Sebastian share.

Taglines:
The most unexpected comedy ever conceived.

Wally wears a Rolex GMT Master with a "Pepsi" Bezel throughout the film.

Continuity:
In the beginning of the film, Wally and Kassie are seen taking the A train. Although we are not shown if they switch trains, when she exits the train and the doors are closing, we see they are now aboard a 2 train.

Sebastian:
I'm having a birthday party.

Wally Mars:
Oh yeah? You enjoy that, there's gonna come a time in your life when you're not gonna want people to know it's your birthday.

Sebastian:
Why wouldn't anyone want people to know about their birthday?

Wally Mars:
Because getting old sucks. Most people don't accomplish what they'd hope to and they realize that they are most likely not going to. They end up living these quite lives of denial, and uh… brushing birthdays under the rug just becomes a part of that.

Sebastian:
Do you ever get scared that you could have Parkinson's disease?
[…]

Way more enjoyable than I was expecting!


I went to see the sneak preview of this movie last night, walking in
with low expectations. I'm not a huge fan of Jennifer Anniston, and the
concept sounded a bit low brow…so I went in pretty cynical. I was
pleasantly surprised! It not only "didn't suck" but was actually pretty
great. I thought the subject could have easily made this very cringe
worthy and hard to believe – and yet it was handled in such a way that
it didn't seem THAT far-fetched (as Hollywood movies go)and the
characters remained believable and even sympathetic at times.


I LOVED Jason Bateman's character. He is negative, neurotic, funny and
cute all at the same time. Aniston played her role very classy, and did
not try to be cutesy or overly dramatic.

I rarely believe cute little kids in movies, yet the show stealer for
me was Sebastian, the son. This kid is going to be a super star one day
if he keeps it up! He is just the right amount of adorable/quirky while
never overdoing it. His big brown eyes well up with tears in just the
right way (choked me up a couple of times), and yet could deliver
'quirk' with complete deadpan expression. Brilliant! All in all, I
laughed, teared up, and managed to enjoy every minute of the
experience. Is it Citizen Kane? No. But it's darn good entertainment.