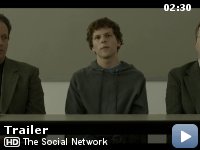 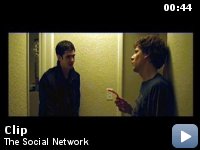 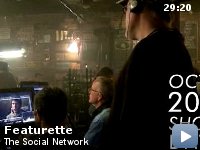 Harvard student Mark Zuckerberg creates the social networking website that would become known as Facebook, but is later sued by two brothers who claimed he stole their idea, and the co-founder who was later squeezed out of the business.

Storyline
On a fall night in 2003, Harvard undergrad and computer programming genius Mark Zuckerberg sits down at his computer and heatedly begins working on a new idea. In a fury of blogging and programming, what begins in his dorm room soon becomes a global social network and a revolution in communication. A mere six years and 500 million friends later, Mark Zuckerberg is the youngest billionaire in history… but for this entrepreneur, success leads to both personal and legal complications.

Taglines:
You don't get to 500 million friends without making a few enemies

Despite the fact that director David Fincher has been a big proponent of digital filmmaking since his 2007 film
Zodiac, this is his first film to have been completely shot digitally (both Zodiac and
The Curious Case of Benjamin Button had certain shots/segments shot on film).

Factual errors:
The first three universities to have Facebook in the UK were Oxford, Cambridge and St Andrews. Facebook came to London School of Economics (LSE) in a later roll-out to British universities.

Mark Zuckerberg:
Did you know there are more people with genius IQs living in China than there are people of any kind living in the United States?

Mark Zuckerberg:
It is.

Mark Zuckerberg:
Well first, an awful lot of people live in China. But, here's my question: how do you distinguish yourself in a population of people who all got 1600 on their SATs?

Erica Albright:
I didn't know they take SATs in China.

Amazingly directed, Greatly Scripted, and Impeccably acted. What more can you ask for in a movie?

I am a big of David Fincher's work, when I realized he was going to
make a film about the creation of Facebook, I was really excited. I
came in the movie with huge expectations, and hopeful that it would
turn out great. I have to say, I was impressed, my expectations were
not only met, but they were blown away. The Social Network easily
rivals Fincher's previous works like "Fight Club" or "Se7en".


Aesthetically the film is very beautiful, its very "Fincher". It has a
very perversely attractive appeal, a glimmering awfulness, as it was
lit from within. David Fincher deserves an Oscar for Best Director, he
is extremely underrated by the Academy. Hopefully this film will
finally bring Fincher in a new light.

The actors did an amazing job, they should all be recognized for their
work in this movie. Jesse Eisenberg did an amazing job playing Mark
Zuckerberg. Hopefully he will not be known as the next Michael Cera
anymore. With this film, he established himself as a serious actor and
he will have a bright future ahead of him. Andrew Garfield also did an
amazing job as the co-founder of Facebook and the best friend of
Zuckerberg. He deserves an Oscar nom and I hope we'll be seeing more of
him in the future. The rest of the cast did a fine job and also hoping
seeing them in the future.

I recommend this movie to everyone, it deals with betrayal and greed.
The movie definitely deserves an Academy award for Best Picture. It is
extremely revalent for our times and many years to come. I consider
this movie is a fine piece of modern filmmaking and probably will be
considered as a classic in the future. So if you're not doing anything
tonight, you should spent an evening in theaters to watch The Social
Network.