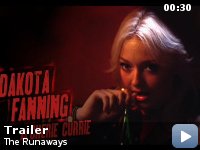 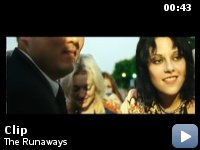 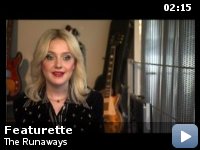 A coming-of-age biopic about '70s teenage band The Runaways.

Storyline
In 1975, San Fernando Valley teen Joan Larkin reinvents herself as Joan Jett, a guitarist who wants to form an all-girl punk band. She pitches the idea to a sleazy manager, Kim Fowley, who pairs her with a drummer and then searches for a face: he finds Cherie Currie, at 15 the perfect jailbait image for his purpose; by luck, she can sing. Two others round out the band, "The Runaways." Fowley books a tour, signs them to Mercury Records, and packs them off to crowds in Japan. Seeds of conflict sprout early: Fowley puts Cherie front and center in the publicity, she's soon strung out on pills and vodka, and jealousies arise. Without adult supervision, where can Joan and Cherie end up?

The film condenses the actual story of the band. In reality, The Runaways continued to perform successfully for another three years after Cherie Currie's departure. Moreover, Currie achieved moderate success as an actress and solo musician well into the 1980s before problems with substance abuse stalled her career.

Crew or equipment visible:
One of the crew's hands can be seen holding a black card in the reflection of the trailer's window when Cherie is standing outside waiting while Kim Fowley and Joan Jett are coming up with the "Cherry Bomb" lyrics.

Marie Currie:
Hello? Cherie, can you hear me?

The latest of two versions


This is an entertaining film version of The Runaways story. I say
version because there is another film on this band called "Edgeplay,"
which complements this movie perfectly. Essentially, "The Runaways" is
Joan Jett's and Cherie Currie's version of things. In "Edgeplay," which
is a documentary, the rest of the band has its say.

But let's discuss "The Runaways."

Kristen Stewart's portrayal of Jett is phenomenal. She's got the
slouchy guitar playing, the gum chewing, the swagger and the foggy
voice nailed. Jett is all girl and quite pretty, but she's always had
the manner of a boy. Stewart gets it right. She is not just twitchy
Bella, for sure.

If you've ever seen the real Kim Fowley (you can on YouTube), you will
see that Michael's Shannon's portrayal of him is not at all over the
top. In fact, many who knew him would probably say this depiction is
too forgiving to the bizarre monster Fowley really was.

Dakota Fanning acquits herself well as Currie, the band's sexpot
singer. The movie gives Currie the only family backstory, probably
because the movie is based on her memoir "Neon Angel." It would have
been interesting to see Jett's back story depicted. The movie might
leave you thinking she's a native Californian, but she didn't move
there with her family until she was a teenager. She was born in
Philadelphia and spent her childhood in Maryland.

Some may question things that happen in this movie. Did they really
write "Cherry Bomb" on the spot for Currie's audition? Did Fowley
really teach the girls to dodge garbage thrown at them on stage? Did
the Japanese really go THAT apesh*t over the band?

Yes to all. Watch "Edgeplay," where these and other facts about the
band are discussed by the girls (now women in their forties) themselves
in 2004. (The doc is available for instant viewing on Netflix.) This
movie was made by Vicki Blue, one of the band's bass players (the
actual band went through five bassists, which is why the bass player in
"The Runaways" is a fictional creation called "Robin").

I have my gripes with "Edgeplay," mostly about the jittery camera-work,
which I guess is supposed to be edgy, but is just pretentious and
annoying. But it is the truth behind the "truth." "The Runaways" makes
no mention of Currie's abortion while in the band or bass player Jackie
Fox's suicide attempt. In "Edgeplay," Fox, now a lawyer, even displays
the scar on her wrist. "The Runaways" makes clear that these teenage
girls fought. "Edgeplay" gets into why. In the doc, it is also stated
openly that some of them were having sex with each other (and it wasn't
just Jett and Currie). Hey, it was the Seventies.

Joan Jett declined to participate in "Edgeplay," despite the fact she
is portrayed in a mostly positive light as perhaps the most ambitious,
talented and level-headed member of the band. I was a bit shocked that
at the end of "The Runaways" when you get the obligatory "what happened
to them" text on the screen, only Jett, Currie and Fowley are
mentioned.

The most shameful omission here is the tragic Sandy West, the band's
doggedly devoted drummer and perhaps the best female drummer in the
history of rock (well, maybe until the Go Go's Gina Schock arrived).
She and Jett essentially started the band, as shown in "The Runaways."
Her history after the band broke up is sad. She was reduced to
construction work. Her post-band life was one of drug using, drug
dealing, guns and jail. She died of cancer in 2006, but in "Edgeplay"
you can see her two years before her death discussing the breakup of
the band, which clearly broke her heart. She never recovered.

It is also wrong to ignore Lita Ford's post-Runaways modest success as
a solo rock artist. She's also the most entertaining interviewee in
"Edgeplay."

All in all, I have praise for both movies. Both are candid portrayals
of the first all-girl band in rock history, paving the way for the Go
Go's, L7, Bikini Kill and, perhaps the most talented of all,
Sleater-Kinney, a band that has also broken up, but in a much more
friendly way.