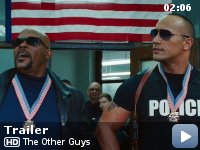 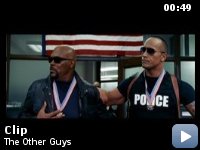 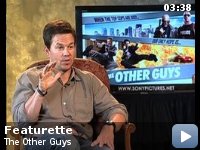 Two mismatched New York City detectives seize an opportunity to step up like the city's top cops whom they idolize — only things don't quite go as planned.

Storyline
Terry Hoitz's past mistakes in the line of duty and Allen Gamble's reluctance to take risks have landed them the roles of the "Other Guys", disgraced New York City police detectives relegated to filling out paperwork for cocky hero cops Danson and Highsmith. The mismatched duo must look past their differences when they take on a high-profile investigation of shady capitalist David Ershon and attempt to fill the shoes of the notoriously reckless officers they idolize.

The role of Detective Highsmith was originally written with Michael Chiklis in mind. However, when offered the part, he turned it down to avoid typecasting after the series finale of his acclaimed police drama,
The Shield.

Continuity:
When Allen and Terry are crossing the bridge in the Prius, a Volvo semi-truck can be seen next to them on the driver's side. When the angle changes to an overhead shot, without the dialogue breaking, there is no truck there.

Narrator:
In New York City there's a fine line between law and chaos. On that line live Danson and Highsmith.

"The Other Guys" Soars, & Will Ferrell Is Finally Funny Again


Adam McKay is not a household name yet, but movie buffs like me know
that when he teams up with Will Ferrell, magic happens. The former
"Saturday Night Live" writer directed Ferrell in "Anchorman: The Legend
of Ron Burgundy" (2004), "Talladega Nights" (2006), and even the
popular viral video "The Landlord" (2007). Movies with Ferrell that
have not involved McKay have tried to duplicate the success of
"Anchorman", but have failed ( i.e. "Semi-Pro" (2008), "Land of the
Lost" (2009)).


As director and co-writer of "The Other Guys", McKay brings the best
out of Ferrell, Mark Wahlberg, and the rest of the cast. It combines
action and comedy better than any similar comedy I have seen in a long
time.

"The Other Guys" refers to, of course, the detectives who rarely get a
piece of the archetypal cops-and-robbers shenanigans that are
frequently seen in action movies or on "Law & Order". They remain
mainly at their desks doing paperwork, something almost never seen in
movies. Ferrell is Allen Gamble, who is somewhat content with managing
case work on his computer, and Wahlberg is the far more forceful and
ambitious Terry Hoitz.

Their characters are in sharp contrast to the cops that Samuel L.
Jackson and Dwayne Johnson portray in this film (and definitely in
other films). Although Jackson and Johnson were also funny here, I hate
that the previews gave away their cameos in this movie. It would have
been more exciting if the audience didn't expect them when they stepped
into the theaters. Then again, that is the fault of whomever marketed
this film, not the filmmakers themselves.

When Allen and Terry start working on a case they have a lead in, one
they get to before other senior detectives do, a really interesting
detective story progresses that would not feel out of place in dramas
like "The French Connection" (1971) or similar action/detective movies
to that nature.

''When you do a comedy, it does no good to reference comedies,'' writer
and director Adam McKay told Entertainment Weekly, ''You want to treat
it like a drama 80% of the way. Then, at the last 20%, you f**k it up".

The last 20% made this movie work, naturally. More than that, though,
Ferrell didn't get all the funny lines, which is the mistake that many
buddy cop movies such as the recent "Cop Out" (2010) make. Wahlberg is
as intense as he usually is in most movies, but he has laugh- out-loud
hilarious lines that he plays effectively with a straight face. His
line about being a peacock may make AFI's Most Memorable Movie Quote
list in the next few years, and the hot water his character got into in
an incident involving Derek Jeter (making a cameo as himself) made the
audience at my screening cheer. Of course, I saw the movie in Boston,
but I'm just saying.

However, the 20% of the movie that was funny was further enhanced by
the story. Again, many buddy cop movies of recent years that have tried
to be "48 Hours" make the mistake of introducing the villain early on,
similar to a superhero comic book. This movie has you try to solve the
mystery along with Ferrell and Wahlberg, and there are some decent
twists and turns that really make you wonder who the culprit is.

I will say that the mystery was a bit confusing, especially since it
involves a Rupert- Murdoch-meets-Donald-Trump tycoon (Steve Coogan) and
some financial plot. As a critic, I could pretend to accurately
interpret everything that I see on screen. However, I'm not a Wall
Street expert, and numbers involved in trading, stocks & bonds, and all
the rest confuse me. Nonetheless, even if you watch this movie not
knowing who's wrong or right and why, you will still love the ride.

The closing credits featured cleverly-animated financial facts
pertaining to the recent financial meltdown, which appeared to be
meticulously researched but still out of place. Their presence reminded
me of Charlie Chaplin's anti-Nazi plea for humanity at the end of "The
Great Dictator" (1941). His speech didn't fit the slapstick comedy of
the first 90% of the movie, but looking back, it was still necessary to
hear. I feel as though this montage of facts may have the same effect.

Overall, though, "The Other Guys" is not just another movie. Some gags
seemed a bit out of place, and the tired plot point of the police chief
pulling the main cops off the case still seeped its way into the story.
However, it helped that that chief was Michael Keaton in what could be
a comeback performance, and that he had some hysterical lines as well.
The movie tells a great story, everyone in the movie is funny without
appearing to try too hard (especially in Ferrell's case), and the
ensemble cast works together perfectly. In a year of mediocre
(non-animated) comedies, "The Other Guys" lives up to its hype.

TagsUSA
The Man from Nowhere
Scott Pilgrim vs. the World