The Names of Love 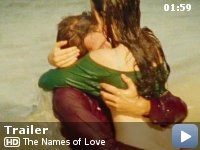 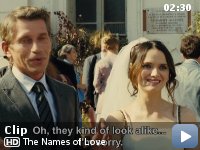 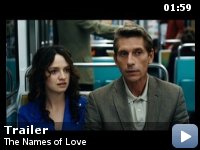 A young, extroverted left-wing activist who sleeps with her political opponents to convert them to her cause is successful until she meets her match.

Storyline
Bahia Benmahmoud, a free-spirited young woman, has a particular way of seeing political engagement, as she doesn't hesitate to sleep with those who don't agree with her to convert them to her cause – which is a lot of people, as all right-leaning people are concerned. Generally, it works pretty well. Until the day she meets Arthur Martin, a discreet forty-something who doesn't like taking risks. She imagines that with a name like that, he's got to be slightly fascist. But names are deceitful and appearances deceiving…

The role of Bahia was initially written as a typically Arabic Marilyn Monroe type, and as such Michel Leclerc and Baya Kasmi were looking for an actress of North African origins. However they were so struck when they met Sara Forestier that they rewrote the part with her in mind.

Anachronisms:
When Bahia's mother is characterized by her likes and dislikes, she can be seen as a hippie in the 70s, and it is mentioned that she hates films of the 70s starring Alain Delon with the word "flic" (cop) in them. Then a poster of the film
Pour la peau d'un flic is briefly shown. Yet, that film only opened in 1981.


Imagine your second name is Leclerc, which is also that of a famous
hypermarket chain. Now imagine you have a friend who writes scripts
whose first name is Baya, only 26 other people in France have in common
with you. Nobody would spare you the question, «Leclerc, … like the
hypermarket?» while your friend couldn't escape «Baya, where does it
originate from? Brazil?» whereas her roots are North African. Why not
take these two peculiarities as a starting point for a romantic comedy
that would deal with questions that matter to you: emigration,
identity, the duty to remember, family secrets, taboos, politics?


Michel Leclerc thus becomes Arthur Martin, an Avian Flu expert, whose
name immediately calls to mind a well known French cooker brand. And
Baya will be Bahia Benmahmoud, an extrovert girl who makes a point of
sleeping with as many right-wingers as possible to win them over to the
leftist cause. And on they are for a very original, very deep film
which, by trying to unite two such dissimilar people, successfully
spans the history of France, from the 1930's until today . And a very
funny one too (the two most irrepressible scenes being the catastrophic
dinner with the in-laws and the crazy cameo of former Prime Minister
Lionel Jospin). The direction is particularly inspired, creative and
unconventional (the characters who address the camera, Jacques Boudet
playing a student and a young soldier whereas he is in his seventies
because Arthur can't imagine him young, Arthur's dialog with his dead
grandparents). «Le nom des gens» has less to do with a standard French
comedy than with such brilliant oddities as «Toto le Héros», «Crazy» or
«Le premier jour du reste de ma vie», also with Jacques Gamblin, who is
perfect here as the dull biologist slowly opening himself to real life.
In the role of his wild, passionate but insecure guide on his way to
love and life, Sara Forestier gives her best performance since
«L'Esquive». Also to be noted are Zinedine Soualem as Bahia's sweet
Algerian- born father, Carole Franck as his energetic militant wife,
Jacques Boudet and Michèle Moretti as Arthur's parents. And of course
Lionel Jospin, who displays a great sense of humor in his only scene.
If you like inventive movies that make you both smile and think over,
this one is for you.