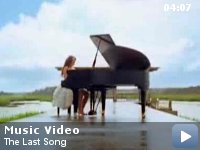 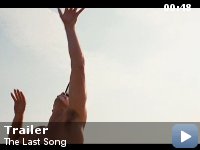 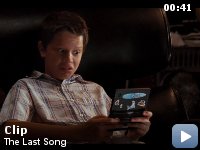 A drama centered on a rebellious girl who is sent to a Southern beach town for the summer to stay with her father. Through their mutual love of music, the estranged duo learn to reconnect.

Storyline
Ronnie's (Miley Cyrus) and her younger brother, Jonah's, parents are divorced. They live with their mother until this summer they are sent to live with their father (Greg Kinnear) in a small town on the beach. Ronnie resents her father and has no intention of being friendly or even talking to him for the summer. But after meeting a handsome guy and beginning to fall in love, Ronnie starts rediscovering her love for music, something she shares with her father. Reconnecting with music revives a kinship with her father which proves to be the most important relationship she may ever experience.

Taglines:
A Story about Family, First Loves, Second Chances and the Moments of Life That Lead You Back Home.

Nicholas Sparks wrote the screenplay for this movie as a vehicle for Miley Cyrus, and then adapted the novel from it. The novel was released shortly before the movie.

Continuity:
Towards the end when Will goes to his dad's brake shop to tell Scott its time to tell Ronnie's dad the truth, when the camera switches back to Will you can see the emblem of the well known "SpeeDee Oil Change" in the background (close to the ceiling) This was supposed to be "Blakelee Brakes," which was said to be a franchise.


Most writers would sell out by repeatedly writing screenplays that are
vastly different from one another. Take Christopher Nolan for example;
going from a psychological thriller where the storyline is paced
backwards to an Oscar-winning blockbuster in which a world renowned
superhero faces off his arch nemesis. Talk about a lack of consistency.
A true writer gracefully keeps revisiting the same story over and over
and OVER again and a great example for that kind of writer is Nicholas
Sparks.

If recycling is healthy for our environment, it has to be with movies
too, right? Never before has this man forgotten to add a romantic scene
at the beach of an Eastern Seaboard sunset where two lovers mutely
stare at one another. And who else can gorgeously stir up a
tear-inducing ending as much as he? Forget 500 Days of Summer trying to
explore the complexities of falling in love with a Hall and Oates dance
sequence and an Expectations vs. Reality analysis. Instead he always
remembers to kill off a protagonist at the end. M. Night Shyamalan
calls HIMSELF the master of unpredictable twists? Puh-lease! Mr.
Sparks's death sequences are so surprising, that you could almost say
they're completely unrelated to the genre that the previous two hours
were aiming to be.

And when a movie like Precious thinks its portrayal of a teenage girl
in emotional turmoil is accurate, it's alarmingly mistaken. There, the
leading lady is impregnated by her own dad, sadistically beaten down by
her mother, all while dealing with obesity and illiteracy on a daily
basis. Ha! Like THAT happens in real life. It's really the Last Song's
Ronnie who deserves our sympathy. I mean, she has to spend the entire
summer in an intimidatingly adorable Georgia beach house, embrace the
pressure of getting accepted into one of the country's most respected
art schools and endure the creepy smile of her overly kind father. Now
that's plausible drama – I only wish I had the guts to sullenly
disregard MY dad whenever he greets me with genuine concern. This
vision of teen angst fantastically brought to life by none other than
Miley Cyrus.

Now there are those jealous haters out there, determined to bring her
acting career down. But they don't understand the effort it takes from
a performer to purse your lips and cross your arms for 90% of a film.
Like me and my fellow Miley fans said – she's just playing herself.
It's really those hacks like Johnny Depp and Meryl Streep who are
destroying everything classic cinema stood for. Who do they think they
are to disappear into the heart and soul of characters they don't
relate to or resemble in reality? When I'm watching a character on
screen, I want to see the actor playing them. That's what made the most
recent, Valentine's Day, so brilliant was that I could watch Jessica
Alba being Jessica Alba the whole time yet grow blissfully unaware to
her character's traits, abilities…heck, I couldn't even remember her
name.

And mad props go out to Greg Kinnear in the role of a lifetime as the
"antagonistic" father. A previous family drama of his called Little
Miss Sunshine featured too much family and like…drama. It acted like
each member had their own ambition and obstacle to deal with at the
same time. What a load! This movie knows better, rather by making every
other character's problems bow down to Ronnie's. In the Last Song, he
delivers this performance, deserving the praise that Mo'Nique received
playing Mary Jones. Never mind the fact Ronnie frequently shoplifts and
snubs Julliard just to make a point. It's really him who's to blame for
everything. How dare you fall out of love and pursue a career that
makes you happy, only to have the audacity to want to mend the wounds
of your broken hearted family? I rooted throughout for Ronnie as she
continuously tried to reconstruct the layers of guilt and avoidance
upon his shoulders. That leads me to my one grievance of this movie; a
rebellious teenage girl visiting her estranged dad and blames one of
her separated parents for breaking the family apart. Really Nick?
That's all just too unfamiliar of a premise for me. At best, the
closest Ronnie ever came to resembling a character from one of your
previous features was Diane Keaton's daughter from Nights in Rodanthe
(pauses) Ohhh!