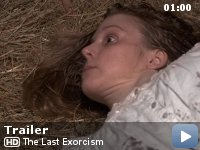 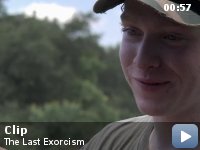 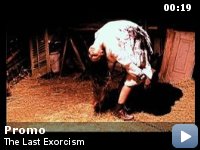 A troubled evangelical minister agrees to let his last exorcism be filmed by a documentary crew.

Storyline
In Baton Rouge, Louisiana, the evangelical Reverend Cotton Marcus was raised by his father to be a preacher. He agrees that the filmmaker Iris Reisen and the cameraman Daniel Moskowitz make a documentary about his life. Cotton tells that when his wife Shanna Marcus had troubles in the delivery of their son Justin, he prioritized the doctor help to God and since then he questions his faith. Further, he tells that exorcisms are frauds but the results are good for the believers because they believe it is true. When Cotton is summoned by the farmer Louis Sweetzer to perform an exorcism in his daughter Nell, Cotton sees the chance to prove to the documentary crew what he has just told. They head to Ivanwood and they have a hostile reception from Louis's son Caleb. Cotton performs the exorcism in Nell, exposing his tricks to the camera, but sooner they learn that the dysfunctional Sweetzer family has serious problems.

Taglines:
Believe In Him.

The film's poster was banned in the UK after receiving complaints deeming the image offensive.

Revealing mistakes:
Supposedly is filmed with a single camera, but for several dialogues, courts are seen as being of two different cameras.

A decent film for people who like AND understand horror


I've been reading the reviews and felt the need to clarify a few things
in case you're reading these reviews, debating whether or not to see
this film.

1. It is not the worst horror film ever. People who say something like
that obviously have not seen enough horror films to know the worst
ones. By no means is this movie a revolutionary breakthrough that will
reinvigorate the horror genre, but the film does a good job at making a
decent exorcism movie documentary-style.

2. The video camera shaking is not that bad. Yes, it shakes, but that's
the style of the movie. Get over it. If you don't like that style at
all and are always made sick by it, don't see it.

3. To say the ending was ambiguous and left people missing the themes
of the movie and therefore a bad choice is also a bit ridiculous. If
you saw the movie Inception and still loved it despite the "ambiguous"
feeling the film left you with and the obsessive pondering over what
actually happened in the last dreams sequence then you can't complain
at this ending which was NO WHERE near as complex. If you take a few
minutes to work it out (talk amongst your friends if need be), the
ending is not ambiguous at all.

4. The filmmakers themselves never claim that this is actual footage.
So stop worrying about "how they found the camera footage" in the first
place. The filmmakers made a work of fiction, and I'm sure they hope
their audience understands this.

I can't deal with all the critiques, but to comment on the films good
qualities:

It does add a few different takes on the "classic" form of an exorcism
film such as the documentary-style, the characters, and particularly
the ending.

As far as scariness, you have to understand the nature of what makes a
good exorcism horror and good documentary horror: the "sluggish build
up" (as many juvenile critics have termed it) is everything. What makes
these movies great is that you, for a while, forget you're in a horror
movie and start to believe you're watching real events unfold. You can
split hairs over how long the film needs to convince you that these
people and situations are real but without it you have no movie, or no
good exorcism/documentary horror film. With it's slower (I wouldn't use
sluggish) beginning the film hopes to sincerely connect you with the
characters and believable setups so that when bizarre events do occur
you are more likely to (sincerely) accept them and be frightened by
them. No, the movie was not overwhelming scary. It doesn't go for cheap
jump out moments (maybe once or twice) or CGI animations of demons
popping out everywhere. But it does deliver a more realistic approach
to child possession than most of its predecessors, which is pretty
scary.

The ending is definitely a big moment for people's final judgment of
the film, because it goes in such a different direction from what the
rest of the film points too. But as stated before it is not ambiguous.
All I will say is keep an open mind, and realize that this film though
documentary-styled is still a work of fiction (again, as stated
before). It took me a few moments to adjust once the ending was over,
but after some thought I didn't mind the twist. Could it have been
better? Definitely. Am I outraged? No. The film makers just wanted to
produce something a little different than the expected exorcism ending.
Perhaps the biggest upset of the ending is that it detracts from
majority of the film's atmosphere of realism.

If you ARE a fan of exorcism movies and movies like the Blair Witch
Project or even horror movies in general, The Last Exorcism is a good
watch to satisfy you're boredom and keep you entertained for an hour
and a half, especially if you understand and like the construct of
"sluggish build up" and if you have a few extra bucks that you're
looking to spend.If your looking for a horror movie that will revive
the horror genre for our time, this isn't it. But the film isn't trying
to be the next big name in horror, so my rating is based off of the
intentions of the film itself. Overall, the movie did it's job in being
mildly original, having great acting (considering that this is in fact
a lower-budget horror movie), in staying true to the genre, and in
delivering an engaging story.

TagsUSA
In a Better World
Beatdown