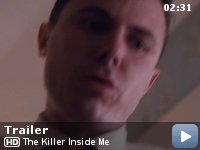 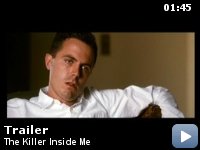 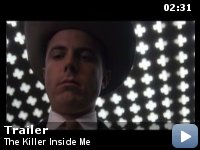 A West Texas deputy sheriff is slowly unmasked as a psychotic killer.

Storyline
Sadism and masochism beneath a veneer of revenge. Lou Ford is a mild-mannered sheriff's deputy in a Texas oil town in the mid 1950's. His boss sends him to roust a prostitute living in a rural house. She slaps him; he hits her, then, after daily sex for the next few weeks, he decides it's love. She's devoted to him and becomes his pawn in a revenge plot she thinks is to shakedown the son of Chester Conway, the town's wealthy king of construction. Lou has a different plan, and bodies pile up as murder leads to murder. The district attorney suspects Lou, and Conway may have an inkling, but Lou stays cool. Is love, or at least peace, in the cards?

Continuity:
When walking back to his car after the first murder, Lou is carrying only his hat. When the camera angle changes to show him from behind, he suddenly has a wooden plank in his hand for no apparent reason.

Sheriff Bob Maples:
Name of Joyce Lakeland. Lives about four or five miles out on Derrick Road past the old Branch place.

Sheriff Bob Maples:
Well, I guess so, but she's – she's been pretty decent about it.

far from perfect, but watchable

First off, this is a film that is made with a lot of artistry, if
little heart. It doesn't bore, the directing is efficient, and it has
an interesting premise: a sheriff who is also a serial killer.It's shot
in an arresting style, all headlights emerging from a dusty road, and
people sitting alone at diners as in an Edward Hopper painting. So
that's 4 good things. However the lack of suspense does get to you
after a while; if you establish that the protagonist is a monster from
the get-go, you are not going to get a lot of ambiguity, and therefore
no tension. Towards the end you are sort of just waiting for more
violence to break out, which is inevitable.

Ah yes, the violence. On this I differ from a large majority of the
public, who seem to find it terribly gratuitous. I thought it is
shocking, but that it is not entirely a bad thing. Yes, the scene of
Jessica Alba being beaten to pulp will disturb, but then again i
thought it was crucial to the story as well. What I do object to is the
lack of conviction in the tone. As a serious study of a disturbed human
being, it doesn't quite go far enough. David Lynch has definitely gone
further. As something in the noir tradition, it falls short, capturing
the style but not the world-weariness and the intrigue. (in fact,
teenage noir Brick succeeds more on this level than The Killer inside
me) And as a black comedy (whenever something terrible happens the
banjos will kick in to give the film a perverse comic twist) again it
doesn't go far enough (the Coen brothers are much better at this sort
of thing, ultra violence shot through with humour). The last shot in
which everything goes up in flames is almost laughable, but not in the
right way.

That said, this is an accomplished effort from a director who clearly
knows his material well, and Casey Affleck gives an effortless
performance as Lou Ford. And I like the often seamless segue from sex
to violence and back to tender embrace; it illustrates perfectly the
dynamics of S/M, if nothing else.

One funny thing is the audience reaction. I saw this at the Hong Kong
film festival, amongst a mostly appreciative audience. Nobody booed; in
fact, there were lots of clapping. Distributors take note: this film
might have a lot more prospects in Asia than in Europe/U.S.A., where
violence on the screen is in fact quite common and quite widely
tolerated. There were lots of laughing ; I think a lot of people felt
that they were watching some sort of black comedy. Just an interesting
cultural observation, as I have heard that the film produced very
negative reactions at both Sundance and the Berlinale.

So, in conclusion, definitely not everyone's cup of tea, but well worth
a look if only to see how a twisted mind works. It's a good portrait of
a disturbed man, even if the story is, ultimately, inferior to the
character.