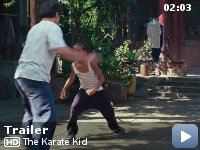 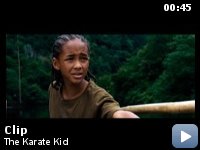 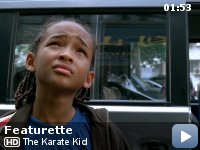 Work causes a single mother to move to China with her young son; in his new home, the boy embraces kung fu, taught to him by a master.

Storyline
12-year-old Dre Parker could've been the most popular kid in Detroit, but his mother's latest career move has landed him in China. Dre immediately falls for his classmate Mei Ying – and the feeling is mutual – but cultural differences make such a friendship impossible. Even worse, Dre's feelings make an enemy of the class bully, Cheng. In the land of kung fu, Dre knows only a little karate, and Cheng puts "the karate kid" on the floor with ease. With no friends in a strange land, Dre has nowhere to turn but maintenance man Mr. Han, who is secretly a master of kung fu. As Han teaches Dre that kung fu is not about punches and parries, but maturity and calm, Dre realizes that facing down the bullies will be the fight of his life.

Taglines:
A Challenge He Never Imagined. A Teacher He Never Expected.

After Dre and Mr. Han climb the mountain, when they enter the temple, we see people in white clothes moving slowly and methodically, as if dancing. The martial art they are practicing is Tai Chi Chuan (literal translation "Supreme Ultimate Fist").

Incorrectly regarded as goofs:
The plane shown taking off to take the Parkers to China is different from the one shown landing in China. The planes shown have different registration numbers which are seen on the fuselages (specifically B-2460 and B-2443). However there is no explicit statement that the plane we are looking at is "their" plane, just that it's an Air China plane taking off / landing.

Dre Parker:
How do you say 'water' in Chinese?

This is how to do a remake

This movie, more so than any film this year, has had the most "noise"
generated. Mostly from people ignorant of the film and just exactly how
good or bad it is. The discussion has been centered on why call it "The
Karate Kid" if he is learning Kung Fu. It is easy; the name is
recognition and "Kung Fu Kid" sounds like a ripoff, not a remake and
this is a remake and they are not hiding the fact. Enough said,
explanation done, go back to your bowl of cereal.

This film takes what was done in the original film and has nicely
upgraded across the board. First, we have more of a threat from the kid
doing the bullying this time around rather than a caricature. The
mother/son dynamic is stronger and given much more screen time. The
romance is more playful and innocent, with the friendship aspect
ultimately being the plot focus. The student/teacher dynamic has an
even stronger father/son underlying tone and finally, the action is
much much improved upon.

All of the above is due to excellent performances across the board.
Jaden Smith shows to be a more than capable actor in the making and
with no doubt observation of Chan, who we FINALLY get to see in a
dramatic role rather than action/comedy role. Smith and Chan have a fun
chemistry that helps make the film enjoyable.

I was afraid through the ads that Smith's abilities would be over the
top great, but through an excellent training montage and philosophical
lessons, we buy that this kid is as good as he is in the tournament.

A standout moment for me was the final bonding scene between Chan and
Smith. It is during a moment reminiscent of the original film's scene
where Daniel finds out about Mr. Miagi's family. Here, we have a
similar scene, but it is what happens after it that establishes their
relationship and seals the audiences relationship to these two
characters. Excellent excellent scene.

One other standout moment is the climax where they do a great job of
ending the movie on a pitch perfect note. I had heard of audiences
literally standing up and cheering, but I figured that was embellished.
That is until the very same thing happened at the showing I caught this
afternoon. You literally do want to stand up and cheer. They also take
the moment a step further than the original did and provided an close
to the lesson that Jackie's Mr Han was teaching Smith's Dre. It became
a full circle lesson and really helped the movie have an even more
satisfying end.

The extended scenes of life in China really help to ground this film in
the philosophical realm, even more so than the original. There is a
richness and texture to everything that takes place against the
backdrop of China. It has an even more "fish out of water" feel that
lends to the believability and desperation of Smith's character. We
also have a lot more character building time spent in this film that
gives it about 13 more minutes run time than the original, but those
extra moments really pay off in a big way. As I mentioned previously,
we get more of Dre and his mom. They don't just show up and then she
gets thrown into a few scenes like in the original. She is an important
part of Dre's life and it is shown.

The one thing I noticed the most about this film was the amount of
families that attended it. I think it is the first film of the year
where adults and kids can go and enjoy a film together and both come
out with the same emotions and lessons learned. That would be a
reflection of the film itself as it shows Mr Han learning from his
student, something that gives the film a welcome twist when compared to
the original.

Those that have pre-judged this film or gotten caught up in the name
game really need to see the film before they make any judgments. This
film is a VERY welcome surprise and more than holds it own against the
original. It stays loyal to the lessons and relationships of the
original film and brings them forward 25 years later.