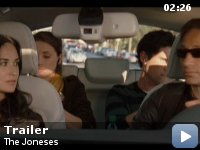 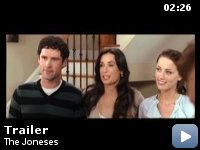 A seemingly perfect family moves into a suburban neighborhood, but when it comes to the truth as to why they're living there, they don't exactly come clean with their neighbors.

Storyline
"The Joneses", a social commentary on our consumerist society. Perfect couple Steve and Kate Jones, and their gorgeous teen-aged children Jenn and Mick, are the envy of their posh, suburban neighborhood filled with McMansions and all the trappings of the upper middle class. Kate is the ultimate trend setter – beautiful, sexy, dressed head-to-toe in designer labels. Steve is the admired successful businessman who has it all: a gorgeous wife, big house and an endless supply of high-tech toys. Jenn and Mick rule their new school as they embody all that is hip and trendy – cool clothes, fast cars and the latest gadgets. But as the neighbors try to keep up with the Joneses, none are prepared for the truth about this all- too perfect family.

Taglines:
Some families are too good to be true

Continuity:
In the middle segment of the car crash, the film is reversed (the car spins the wrong direction).

Steve Jones:
Yes, it's like riding on the ass of an angel. I mean, I wish I could have sold a crossover like this, I wouldn't have been able to keep them in stock.

Hope this "sleeper" finds an audience!


It's not often you can sit down for a couple of hours of genuine
entertainment and come away feeling like you've just learned a thing or
two about life. Such is the deft, skillful balance achieved in "The
Joneses." I won't mention a single plot point, because the less you
know about this film — other than it being an excellent film-going
experience — the more enjoyment you'll have in the theater.


It's a tribute to David Duchovny and Demi Moore that they apply their
considerable skills to breathe real life into what could otherwise have
been caricatures in the hands of less-talented actors. The little
facial expressions, the subtle glances, the telling pauses, the body
language… everything that makes film a medium of intense impact is
used to tremendous effect, all expertly guided by the emerging artistry
of director Derrick Borte.

It's almost impossible to be unconsciously sucked-in by these
characters on the screen, in virtually the same way their celluloid
neighbors are likewise seduced by everything about them. Yet, there's
an underlying discord, an uncomfortable, inescapable tension that
pervades the truly captivating plot and persists through genuinely
amusing humor, signaling your gut that something is not quite right. It
is only with the full unfolding of the plot that we come to realize
just how profoundly twisted things are — all the more disturbing
because this fictional set piece is a shockingly true-to-life
reflection of the world all around us.

It is genuine enlightenment to witness the choices made when the
characters are ultimately forced to resolve the true issues they
confront.