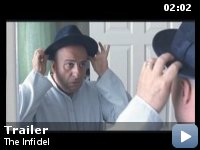 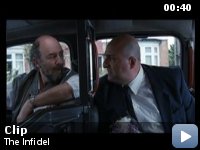 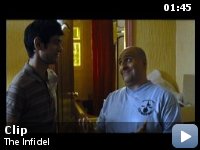 An identity crisis comedy centred on Mahmud Nasir, successful business owner, and salt of the earth East End Muslim who discovers that he's adopted – and Jewish.

Storyline
Based in a London suburb Mahmud Nasir lives with his pretty wife, Saamiya, and two children, Rashid and Nabi. His son plans to marry Uzma, the step-daughter of Egyptian-born Arshad Al-Masri, a so-called 'Hate Cleric' from Waziristan, Pakistan. Mahmud, who is not exactly a devout Muslim, he drinks alcohol, and does not pray five times, but does agree that he will appease Arshad, without whose approval the marriage cannot take place. Shortly thereafter Mahmud, while going over his recently deceased mother's documents, will find out that he was adopted, his birth parents were Jewish, and his name is actually Solly Shimshillewitz. He conceals this information from his family, and with the help of his neighbor, Leonard Goldberg, tries to understand the Jews, their religion and even locates his birth-father, who is on his death-bed in a nursing home. Mahmud does not know that Arshad has been checking into his background…

Cameo:
[David Baddiel]
The movie's writer can be seen on the TV show,
The Wright Stuff, that Mahmud watches.

Lenny Goldberg:
Solly Shimshillewitz? Why didn't they just call you "Jewe-jew-jew-jew-jew" and be done with it?


I've just returned from what the organizers dubbed as "The World
Premier" of 'The Infidel' at the Hammersmith Apollo, and the mere fact
that the first thing on my mind is to review it should say something
about this strategically mastered movie written by David Baddiel, who
to my surprise can deliver an equally hilarious stand up performance.


The movie takes place in East London and it revolves around the life
the Mahmud Nasir a semi-liberal Muslim family man minicab driver whose
world gets disrupted by his mother's death and goes into an emotional
period compounded by his son's recent engagement to a Pakistani "hate
cleric's" step daughter. Mahmud uncovers his birth certificate while
cleaning out his mother's stuff and eventually discovers that he is
adopted and his original parents are Jewish.

As Mahmud's world swivels in a state of disarray he turns to the only
Jewish person he knows, semi-alcoholic recently divorced clinically
depressed Lenny (Richard Schiff from The West Wing), who takes it upon
himself to teach now 'Solly Shimshillewitz' Jewishness! The two embark
on a journey of "oy vey" rehearsals and 'Fiddler on the Roof' reaction
sessions as Lenny shows Mahmud the difference between the various types
of London Jews. Mahmud's life takes a turn for the worse when he
accidentally uncovers wearing a yarmulke at a pro-Palestine rally to
which he reacts and subsequently becomes blessed by the "hate cleric".

During this period Mahmud questions his identity and goes into a
cathartic phase where logic prevails and he reaches a firm conclusion
of who he is and what it means to be Mahmud Nasir.

This tactically mastered comedy touches on subjects regarded as taboo
in the film industry and attempts to portray logical religious
soundness at a time when religious righteousness is synonymous with
hate. A well delivered comedy filled with laugh out loud moments
entertains, educates and surprises with a performance by Omid Djalili
that can only be described as "joyfully expected".