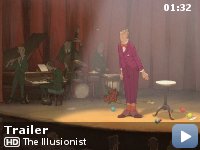 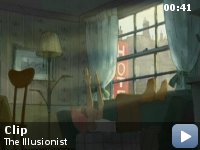 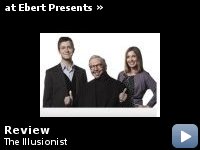 A French illusionist finds himself out of work and travels to Scotland, where he meets a young woman. Their ensuing adventure changes both their lives forever.

Storyline
Details the story of a dying breed of stage entertainer whose thunder is being stolen by emerging rock stars. Forced to accept increasingly obscure assignments in fringe theaters, garden parties and bars, he meets a young fan who changes his life forever.

When Jacques tries to hide from the girl, he ends up in a theater, The Cameo, where
Mon Oncle by Jacques Tati is shown. "L'illusionniste"'s script was first written by Tati, whose figure and character was taken to create the main character Jacques Tatischeff (Tati's original name).

Anachronisms:
Despite being set in 1959/1960, the Scottish Police motorcycles have 'American-style' sirens, which were not introduced until the 1980s.


It was my great privilege to be invited to the world premiere of
Sylvain Chomet's follow up to Belleville Rendez-Vous.

Set in Edinburgh and produced by an old pal of mine, Bob Last, I had
very high expectations indeed. Not least because it is not every day
that one of the world's most beautiful cities (my own) would be caught
in artful majesty for years to come. And indeed it was. Edinburgh is a
real star of this charming but very slight movie.

The city shimmers throughout, but the story sadly does not. It reminded
me of a novel by Irish writer, William Trevor, called Felicia's Journey
in which a young girl is taken into the trust of an older man. In that
book (and subsequent film starring Bob Hoskins) and this, there is a
slight air of seediness. (That's maybe going too far in the case of The
Illusionist but the comparison was palpable for me.) Why the
protection? What are the man's motives? I found it mildly
uncomfortable. The fact is, in neither case are the intentions,
apparently, anything more than protective; but somehow the feeling
persists in both that all may not be as it seems.

Belleville Rendez-Vous arrived on the film scene like a bolt from the
blue. This, sadly, suffers from that difficult second film syndrome. It
oozes class and charm from every pore. It looks sublime. But the story
(a Jaques Tati cast off) fails to deliver. It simply does not have the
muscle to sustain 90 minutes of screen time.

A real shame because it has a great deal of merit.