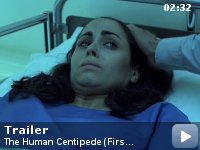 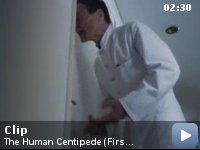 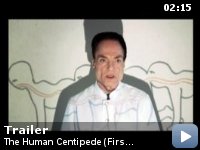 A mad scientist kidnaps and mutilates a trio of tourists in order to reassemble them into a new "pet"– a human centipede, created by stitching their mouths to each others' rectums.

Storyline
Two pretty but ditsy American girls are on a road trip through Europe. In Germany, they end up alone at night with a broken car in the woods. They search for help and find an isolated villa. The next day, they awaken to find themselves trapped in a terrifying makeshift basement hospital along with a Japanese man. An older German man identifies himself as a retired surgeon specialized in separating Siamese twins. However, his three "patients" are not about to be separated but joined together in a horrific operation. He plans to be the first person to connect people via their gastric systems. By doing so, he plans to bring to life his sick lifetime fantasy, the human centipede.

Taglines:
Their flesh is his fantasy.

The paintings of conjoined twins displayed throughout Heiter's villa were painted by Tom Six, which he felt contributed to the atmosphere in the house.

Incorrectly regarded as goofs:
The phones in the house are not real phones, but they are connected to the doorbell as an intercom system. This is shown when Dr. Heiter answers the intercom, and it is the police at the door.

Jenny:
[speaking on a hotel phone]
Hi. Yes, um, I was wondering if I could get driving directions to a nightclub called Bunker. Yes, Bunker. How exactly would I get there?

Starting from a good idea, the director/writer totally screws it up, in
my humble opinion. I started watching this because of the '100%
medically accurate'-marketing, as I'm a student in medicine. It was far
from accurate or realistic.. Not medically, not in any way. I'm only a
student and still see some big mistakes. Obviously they hadn't even a
nurse on the set.


-The odds that two random persons are compatible to each other are
quite low (that's one of the problems with organ-transplant). How lucky
is he that the two girls match! And since the third guy isn't, he just
go grab a random Japanese guy out of his backyard, who apparently
hasn't a clue what he's doing in Germany(let alone Europe). He doesn't
speak neither English nor German nor any other language except for
Japanese.

-Girl number 2 shows rejection signs at the end of the movie. Which
shows that: a- the doctor hasn't worked sterile (he scratches his
forehead during the operation, an error a regular surgeon would never
do) or b-he didn't gave immuno-suppressing medication, a real doctor
would never oversee such a thing or c- they didn't matched (but as you
can see prior to the operation, he had them tested).

-About that test: as far as I know, it's not the kind of test you can
run in your basement, and I really doubt that you can make a lab do
that from anonymous people for someone without a practitioners license
anyway. As he is 'retired' (most likely fired for his dog-experiment),
it' s very highly likely that he hasn't got his license anymore (= no
professional secrecy possible).

-By far the most hilarious error is when he has his stethoscope in his
ears.. He has it in the wrong direction!!! A stethoscope should be worn
so that the ear-canal and the branches of the stethoscope are in the
prolongation of each other. Like he is wearing it, it makes a small
angle. This is something anyone with paramedical knowledge would see
right away. (please feel free to search the internet for proper
stethoscope wearing instructions if I didn't made myself clear on this
point)

-If I were a very sick-minded ex-surgeon, I would have connected their
blood-circuit. Without it, survival is impossible from the start.
First: you can't survive eating excrement from just one person, second:
as the urinary tracts are not connected either, the second and third
subject would die from dehydration even before they'd die from hunger
and third: connecting the rectum with the mouth makes it possible for
bacteria from the lower gastric tract (f.e. E.Coli) to infect the upper
gastric tract of the second person resulting in diarrhea in the first
place, probably followed by generalized infection and death later on.
There's a reason why the intestinal tract is segregated.

-And my last point is the following: the second girl dies -apparently-
from generalized infection. If that's the case, the first girl would be
evenly infected. You should also be aware that dying from generalized
infection is quite a slow death involving very high fever and tissue
necrosis, which she doesn't shows symptoms of.

Except from the medical point of view there are other illogic things:
the police's behavior towards the doctor, the neighbors hearing
screams(but not another house in sight, and the police shows up very
late compared to when the screams might have been heard). And how the
hell did the doctor managed to plant the scalpel in the first
policeman's neck while unable to do anything else but crawling?

Furthermore, there is nothing innovating compared to other horror
movies. (See colleagues' reviews) I think I made my point clear, but if
realism doesn't bother you, you might like it. Although I really doubt
it.