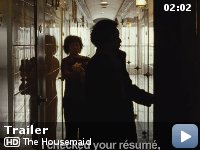 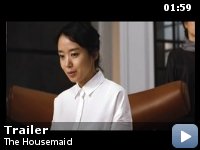 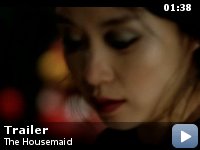 A man's affair with his family's housemaid leads to a dark consequences.

Storyline
A man's affair with his family's housemaid leads to a dark consequences.

A Nutshell Review: The Housemaid


The buzz on this film is ringing out loud. A remake of the original
film by Kim Ki-young, widely considered one of the top Korean films of
all time, this updated version by Im Sang- soo is a lot more revealing
and explicit in nature for the modern audience probably sensitized to
it, being one of the films selected for competition at this year's
Cannes Film Festival, and its two limited screenings during our Korean
Film Festival were one of the earliest to have sold out. Needless to
say it makes good sense for a commercial release here.

The premise is simple, where Eun-yi (Jeon Do-yeon) got invited by
Byung-sik (Yun Yeo-Jong) to serve in an uber-rich household made up of
three members – the master of the house Hoon (Lee Jung-jae), his very
pregnant wife Haera (Seo Woo) expecting a pair of twins due anytime
soon and hence the need for an extra help around the house, and their
daughter Nami (Ahn Seo-hyeon) with whom Eun-yi forms a strong
friendship with, since a child is non-judgemental on someone's
background and social standing.

As much as most would like Eun-yi, a divorcée, to enter the household
and see an opportunity to seduce Hoon, this is not that movie, and
neither was that the motivation at all. We see the fairly impoverished
background that Eun-yi came from, and living amongst the rich and
powerful provided a chance to live the high life, since the family is
extremely wasteful. With Byung-sik showing her the ropes necessary to
do her job, from the bowing to the serving, the cleaning and being at
the beck and call of the household members, the hardship probably is
well worth it for the perks that come with the job, ones that are
beyond the reach of ordinary folks.

So when things turn, you'll find yourself wondering the exact
motivation she allowed herself to open up (pardon the pun) to the come
hither of the master of the house, who has a penchant for alcohol and
being brought up with a silver spoon, there's no such thing as a No to
any of his request, although on the outside he may be that rich
gentleman, it's not far- fetched to think that these folks would
consider money as the basis for all things going their way, and money
being the basis to bail themselves out of trouble, and to keep the
mouth of others shut. Money as the root of all evil, probably couldn't
be more true here if those with the means decide to abuse it, given the
mindset of theirs that they can always get away from the blame game.

But what's more engaging in the film is the power play amongst the
characters, who are well, mostly female, fawning over the attention,
the riches and the ability of what the man in their life can offer.
There's Byung-sik being extremely envious with her protégé she
introduced to the household, being the unjaded hard and younger worker
who earns the trust of the family, and probably she had wanted to show
the young upstart her place in the hierarchy established. And of course
the main cusp of the problems Eun-yi will face stem from the child in
her, threatening the balance of power especially that of mistresses and
maid, with stuff that's what television melodramas get made of. To the
audience, we don't feel that Eun- yi is of the scheming type, but to
the other women, here's a chance of their objectives being detailed by
something most unfortunate, a major threat that can come sooner or
later in their lives that they have to act, and stop now.

Jeon Do-yeon deserves all the acting accolades she has received thus
far for her role, and we feel the pain she has to go through in having
traumatic experiences forced upon her just because she's in no position
to bargain, until the defining moment in the finale where she gains the
upper hand but at what a price at scarring the family for life. I
haven't seen Lee Jung-jae in action since Il Mare, and here he does an
about turn in a negative role that portrays the caddish behaviour of
someone who has it all, while the young Seo Woo portrays the wife
that's quite reasonable to begin with, that typical tai-tai but with
innocence, until hell hath no fury like a woman scorned.

It is the power struggles and the changing of the household dynamics
that makes The Housemaid an engaging watch as we witness an internal
rot that was waiting to happen. While it may not reach the heights of
Kim Ki-young's original, Im Sang-soo's version still keeps things tight
and is a wonderful exploration of how perceived threats redefines
relationships especially that amongst those with material benefits.
Recommended!

Room in Rome
Letters to Juliet