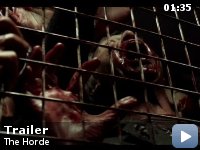 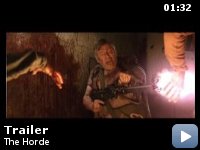 An end of the world battle between gangsters, cops and zombies.

Storyline
A posse of crooked cops, malevolent gangsters and a horde of walking dead are the centre point of this gruesome, tight, action packed, claustrophobic tale of retribution and escape. Penned like animals, on the top floor of a deserted high-rise block, these two opposing gangs find that they are not alone in the lair of bloodthirsty corridors of death. Joining forces to survive, they must reach ground level together or perish. Loaded with a bad ass attitude, guns, axes and extremely creative hand-to-hand combat sequences that project the fears and paranoia that are the fighting forces behind the need to survive, when caught up in the wrong place at the wrong time.

Shown as the closing film at Leeds International Film Festival's "Day Of The Dead" horror film marathon on 7th November, 2009.

Revealing mistakes:
After one of the cops was executed by a gangster you can see him still breathing in a later shot.


When detective Mathias Rivoallan is found murdered by the gang led by
the Nigerian Markudi (Eriq Ebouaney), detectives Jimenez (Aurélien
Recoing), Aurore (Claude Perron), Ouessem (Jean-Pierre Martins) and
Tony (Antoine Oppenheim) decide to revenge the death of his friend. The
vigilantes plot bloodshed, executing Markudi, his brother Bola (Doudou
Masta) and the other gangsters in the abandoned building where they are
gathered. However, things go wrong when the watchman arrives and the
violent gang subdues the quartet and tortures them. Meanwhile, the
lookouts of the gang hear explosions, sirens and the weird sound of
rabble. Sooner the survivors discover that the building is under siege
of a horde of walking dead and the hungered zombies want to eat them.
Ouesseem and Aurore team up with Markudi, Bola, Grego (Jo Prestia) and
the veteran René (Yves Pignot) and together they have to fight against
the zombies trying to find an exit from the building.


"La Horde" is an insanely gore and violent French horror film. The gore
recalls "Braindead", but without the black humor of the trash cult
movie of Peter Jackson. The plot is full of action, but none of the
characters is likable. The origin of the walking dead is not developed
and has only a minor explanation on television that mentions an
epidemic. On the contrary of George Romero's slow zombies, in this
flick they run like hell. My vote is six.

True Legend
Beauty and the Beast