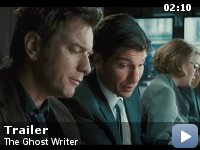 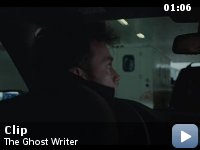 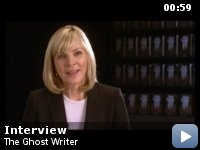 A ghostwriter hired to complete the memoirs of a former British prime minister uncovers secrets that put his own life in jeopardy.

Storyline
An unremarkable ghost-writer has landed a lucrative contract to redact the memoirs of Adam Lang, the former UK Prime Minister. After dominating British politics for years, Lang has retired with his wife to the USA. He lives on an island, in luxurious, isolated premises complete with a security detail and a secretarial staff. Soon, Adam Lang gets embroiled in a major scandal with international ramifications that reveals how far he was ready to go in order to nurture UK's "special relationship" with the USA. But before this controversy has started, before even he has closed the deal with the publisher, the ghost-writer gets unmistakable signs that the turgid draft he is tasked to put into shape inexplicably constitutes highly sensitive material.

Lang's beach house set was built entirely in a studio. The Cape Cod views through the windows were the result of green screens.

Continuity:
In the middle of the movie the Ghost underlines all instances of "Ruth" in the manuscript. Later in the movie he underlines various words including "Ruth" which now has no underlining.

The Ghost:
You realize I know nothing about politics.

Rick Ricardelli:
You voted for him, didn't you?

The Ghost:
Adam Lang? Of course I did, everyone voted for him. He wasn't a politician, he was a craze.

Has Polanski made the perfect movie?


The key word here is suspense, the perfect blend of a director at the
peak of his powers, a script that beautifully works with a source
without diluting its essence or compromising its subject matter, and
with a timing so perfect that no false note is hit, enrapturing its
audience, never letting go, pushing its limits as the audience awaits
its incredible resolution.


McGregor plays a hired writer who comes in to assist Lang (Brossnan) in
the publication of his memoirs. Timing couldn't get worse as an
unexpected complication ensues and many people's lives and reputations
are suddenly in danger. As the film reaches its conclusion, with
tensions and levels of paranoia reaching unheard limits, it's got our
attention, and it has earned every bit of it.

The quality of the writing is impressive, with no false moves, no red
herrings, no unnecessary distractions, no manipulations to sway you one
way or another. What we have is a mix of intrigue, action,
Shakespearean drama, and performers who might never be this good again.
Polanski channels Hitchcock at his best, using Desplat's driving score
(himself channeling Herrman), and just when it all could have been a
tribute, it soars above its inspiration.

Among so many impressive elements, one has to mention the note perfect
and outstanding Olivia Williams, an actress that has moved on from
being physically alluring to developing acting talents which could rank
her with Streep and Close because of her impeccable and powerful turn.
Here is a woman who hardly resorts to gimmicks, but takes the most
normal of situations and weaves a wave of intrigue that would leave you
breathless.

"The Ghost Writer" is a mystery, a thriller, a tribute to the masters
who inspired the genre and might even surpass all those sources of
inspiration. The film mixes politics with an old fashion thrills and
makes us wonder why Hollywood hasn't made movies like this more often.
It's early in the year, but it's going to be hard to find anything that
can even come close to this movie, a film that is as perfect as
anything any director has ever put together, Hitchcock included.